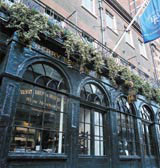 The UK’s oldest wine and spirits merchant is set to expand the hospitality facilities at its historic site with two dining and reception rooms, which are being converted on the tiny alleyway, 2 Pickering Place, which runs off the main street.

The two additions to the cavernous shop and cellars will be called the Defit Room and the Long Room, and are being designed by Sandra Agar Renovation, with furniture by Lutyens Design. The rooms will be used to host small parties of up to six and 12 people respectively.

According to a spokeswoman for Berry Bros & Rudd, ‘The development of these areas has taken place due to the increase in demand for our existing corporate hospitality facilities below the shop. Number 2 Pickering Place will be a very exclusive entertaining venue and will cater for smaller numbers than the [existing] Napoleon Cellar and Pickering Cellar.’

Alongside these converted cellars, which date back more than 300 years, the St James’ Street site also plays host to a specialist Still Room – for tasting and buying malt whiskies, cognacs, armagnacs, rums and collector’s items; a Promotions Room that displays the company’s bottled products; a Parlour and a Consulting Room. The shop’s faÃ§ade dates from 1730 and is one of few 18th century shop fronts remaining in the capital.