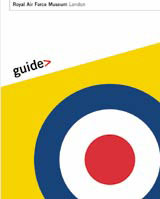 Agenda Design has created a guidebook for the Royal Air Force Museum to coincide with the unveiling this week of its Milestones of Flight building in Hendon, but its identity for the museum remains grounded until the direction of the RAF brand is clarified.

Although Agenda has presented concepts for a rebrand, including a new name – RAF Museum London – interior signage and a marque, implementation is still on hold pending the results of research into the RAF’s image, which is being carried out by the Central Office of Information Communications (DW 19 June).

The research appears to have become more involved than anticipated and the RAF Museum identity is now scheduled for take-off in May 2004.

According to Agenda Design creative director Paul Davis, research findings suggest that many 15- to 25-year-olds do not know what the initials RAF stand for or recognise its roundel.

‘We went through the whole design stage and [initially] it was felt that if the museum identity was slightly different from the RAF logo it wouldn’t matter too much, particularly with the pressure to open the [new] gallery,’ Davis says.

‘The previous museum identity [devised before Agenda was brought in] was a long way from the RAF identity. [Now] the view is that it does need a steer from the parent brand,’ he adds.

The consultancy’s original brief was to reinforce the Hendon museum’s brand and its links with sister sites at RAF Cosford and RAF Stafford, with tourist and recruitment audiences in mind.