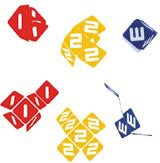 According to Kemistry creative director Graham McCallum, the London group was charged with creating ‘Christmassy’ restylings of the channels’ individual idents and a five-minute New Year sequence to be shown across all three channels in the final moments of 2003.

The New’s Year idents will feature a ‘countdown clock laid over an edit of the main events of the year for the Dutch people’, says McCallum. This will be shown in its entirety on the broadcaster’s mainstream channel, Nederlands 1, with the more eclectic Nederlands 3 and family-focused Nederlands 2 channels opting in on the third minute of the sequence.

Nederlands 2 will then go live to the New Year’s celebration on Amsterdam’s Dam Square, while the sequences shown on Nederlands 1 and 3 culminate in pre-taped fireworks and music.

The Christmas idents, rolling out next week, are differentiated for each channel, says McCallum. The Nederlands 1 sequence will show the channel’s logos ‘falling like red snowflakes’, while those for Nederlands 2 and 3 depict the logos being ‘fired into the camera like snowballs’ and ‘skating around on a big piece of ice’, respectively.

Kemistry won the work in November on the basis of its previous relationship with Publieke Omroep. The consultancy created an integrated identity for the broadcaster, inspired by the De Stijl art movement, last autumn (DW 4 September).