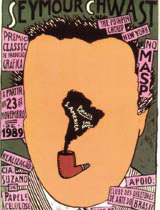 ‘It’s all about problem-solving,’ he suggests. ‘If you have to do a peace poster, you approach it the same way you approach a commercial assignment. You find the right kind of symbols or metaphors in order to get the message across in a powerful way. ‘The approach, it’s always the same.’ Chwast underplays the issue. ‘Generally, political things have been done either on my initiative, or for some non-profit organisation where I wouldn’t get paid.’ He looks for the humorous side to the issue, adding, ‘Working for someone who can’t afford to pay me, and has no right to criticise, means I have more freedom.’

However, it is clear that Chwast feels that the expression of opinion is valid to the designer. Chwast and Push Pin invented the concept of the designer as publisher with their own broadsheet, the Push Pin Graphic. ‘Now there are many books promoting designers,’ says Chwast. ‘Years ago that was unheard of.’ Chwast and Push Pin published the Push Pin Graphic for more than 20 years. ‘That was a way for us to do something interesting that we wouldn’t normally be able to do, using type and illustration on a theme. At one point we had to stop because it became just too much of a [financial] burden. Now I do another little thing called The Nose, because I can’t keep away from publishing.’ Chwast makes light of his publication, though its underlying themes are social and political. ‘The name is about making fun of other magazines, like The Face and so on. Anyway, I was able to make the S into a nose shape. What other reason do you need?’

Chwast is an obsessive, but he applies it in his work with a light-hearted touch. He draws constant reference to themes in his work, notably Art Deco, cars, Sigmund Freud and a preoccupation with upside-down heads. ‘I like cars,’ he says. ‘Whenever I can, I do a job with cars…’ Chwast breaks off, as if pondering his obsession. ‘What’s interesting is what cars represent to people: power, or the lack of it. I draw heads as well.’

Chwast has more recently worked on children’s books. ‘With the slowdown in the economy, especially in illustration, we found we had more time on our hands.’ We talk about graphic novels. ‘Yeah, I tried to do a graphic novel of Voltaire’s Candide. I was going to add every word, but I haven’t found a publisher. I guess I was going against the trend.’ Why Candide? ‘Well, it’s a funny book.’

Disney could be about more than the bottom line