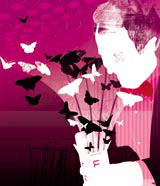 Design Events founder Deborah Dawton is appointed chief executive of the Design Business Association. She announces plans to ‘wind down’ her own business after she takes on the DBA role in April.

Wells Mackereth cosies up to knitwear brand Pringle, creating interiors for the label’s second London store and headquarters, and revamping its concession at Selfridges’ in Oxford Street.

New Look unveils groundbreaking plans for a London flagship store by architect Future Systems and a Tandem-designed logo (4) in a bid to compete with high street heavyweights. It is the first major change to its logo in 20 years.

Waitrose starts rolling out a revamped identity by Interbrand and JHP. Retailers will form the bedrock of designers’ client base throughout the rest of the year.

The Design Museum triggers an avalanche of identity work across British galleries and museums (see May, June, July, August, October), with a controversial new look by Graphic Thought Facility with illustration by Kam Tang (5). Later in the month, London’s troubled Docklands Museum announces plans to merge with the Museum of London. It approaches Pentagram, which created the Museum of London’s marque, to revamp its identity.

Innocent appoints Coley Porter Bell to tighten up its packaging design (6). It is the first time the natural fruit drinks company has collaborated with an outside group since Turner Duckworth developed its original packaging.

Sir Terence Conran (8) urges some 800 delegates at the Design Indaba conference in Cape Town, South Africa not to support the impending military action in Iraq.

Peter Phillips steps down as partner at Tangerine to pursue ‘a new set of challenges’. He will later re-emerge as head of product in former Fitch Worldwide chief executive officer Paul Stead’s multidisciplinary venture, The Brewery (see November).

Brighton University appoints Circus and Blast to evolve its brand identity. Meanwhile, The University of London’s School of Oriental and African Studies and Manchester University take the first steps towards modifying their identities. Several other institutions will go down this route in 2003 in the wake of Government initiatives and increased competition (see November, December).

Innocence wins its first major client, the Co-operative Movement, since the Interbrand spin-off began operating as an independent consultancy within the Omnicom network.

Landor Associates and Wolff Olins go head to head for the post of brand guardian to Royal Mail, as the organisation moves to cut the number of groups it works with (see June).

Siegelgale announces the closure of its London office to service all international clients from New York.

Managing partner Jane Simmonds (12) leaves Fitch London without a job to go to. It is the first departure in what turns out to be a year of radical change for the group (see May, June, November). At the same time, chairman and chief executive of FutureBrand John Elkins (13) unexpectedly quits the group to become head of global brand and marketing at Visa International, starting a high-profile exodus (see July).

Interbrand creates an identity for ERC (14), the organising body for European club rugby, as it seeks to strengthen its brand positioning within the game.

Design Events, founded by DBA chief executive Deborah Dawton in 1994, announces it is to cease trading in July (see January).

The regeneration of Battersea Power Station (15) steps ahead with the launch of the Random Media designed website, www.thepowerstation.co.uk, revealing plans, images and timings for the planned leisure and retail centre under developer Parkview International (see December).

The Design Council announces that Richard Eisermann is to join as director of design and innovation in July.

McDonald’s announces the launch of three contemporary interiors concepts in its British restaurants (18), while Pizza Hut steps up its development programme with four new-build restaurants as part of a £1.5m interiors concept. Pocknell Studio is to serve up a six-figure brief for Italian fast food concept Fresh Italy.

The Partners refreshes Ford’s blue oval logo (19) as the group re-introduces its identity as its corporate logo.

The spectre of Enron looms over Design Week’s Top 100 this year, with many big groups shying away from the charts because of new accounting legislation covering US-listed companies.

WH Smith unveils a two-storey concept store in Guildford designed by The Nest that is to trial a fresh approach to how the chain presents its brand.

Apple’s vice-president of industrial design Jonathan Ive is awarded the inaugural £25 000 Design Museum designer of the Year prize, for his work on products like the iMac and iPod.

Charles Trevail makes a shock exit from FutureBrand, following the departure of John Elkins in April.

Upper-end-no-frills airline Duo is unveiled before its October take off, with branding and interiors by travel specialist Brand Environment.

Williams Murray Hamm severs ties with Hovis, citing ‘differences’ with the client over future plans for the brand.

Fitch London finally passes into the hands of WPP Group, following the completion of the acquisition of its parent Cordiant Communications Group.

Screen specialist English & Pockett splits from FutureBrand and Interpublic Group by buying back the 75 per cent stake it sold to IPG in 2000.

The lid is closed on Trickett & Webb only a month before its 32nd anniversary party. Lynn Trickett joins her husband Terry at Trickett Associates, while Brian Webb installs himself at Webb & Webb.

Mobile network O2 opens its Oxford Street flagship, the first of 50 new stores. The store design, featuring interactive windows and an LED wall, were done through a consortium consisting of Murray 03, Digit and Ideo.

Royal Mail cuts its 13-strong roster of design consultancies to: Carter Wong Tomlin, The Open Agency, Start, The Design Group and Bi-Design, plus Wolff Olins and Proximity for strategic work.

Ex-Digit senior staffers Simon Sankarayya, Nick Cristea, Orlando Mathias, Mickey Stretton and Phil Gerard get it together to set up progressive interactive design group All of Us.

John Simmons calls it a day as Interbrand’s director of verbal identity after 19 years as the branding group’s man of words. He helps launch the writers’ collective 26, numerated from the length of the alphabet.

Lego builds a retail plan with Fitch London for a toy store concept to be rolled out across UK, US and European markets. The move is part of an initiative to rethink what the brand could do.

Sir Martin Sorrell predicts that the global marketing services sector is ‘climbing out of the bath’ for 2004.

The inaugural London Design Festival kicks off with an ambitious programme of over 40 events, including the World Creative Forum.

The Salvation Army calls in Hat-Trick to advise on its new-build international headquarters in London. The appointment includes a look at how to put across the organisation’s identity to the modern public.

Fitch London’s ‘Overground Network’ branding work for London’s rail services, designed to clarify services for passengers, launches on four London routes. A future roll-out across the capital’s rail network is on the cards.

Intro creative director Adrian Shaughnessy (21) announces he is leaving the group, after 15 years, to ‘concentrate on writing and creative consultancy’.

Landor Associates has a busy month, beating four other groups to rebrand Siberia Airlines, the world’s fourth fastest-growing airline, and launching an identity for BP’s nascent fuel offer, BP Ultimate, across the UK.

Six jobs at Design Bridge London hang in the balance, as the group decides to run its identity business from its Amsterdam office. Managing director corporate and service branding Sophie Seveno continues to head the team.

Boots the Chemists denies that the pitch for its £90m account will affect design rosters. However, the appointment of Mother in December is backed by Circus and Poke.

Designers express concern about the selection process for London’s Olympic bid logo (24), after it emerges that London 2012 shortlists only seven designs from a long list of 1100.

Fitch founder Rodney Fitch makes a triumphant return to the consultancy he helped create in 1973. He leaves Portland Design, which he joined following the demise of Rodney Fitch & Co, to become chairman of the latest incarnation of his old group – Fitch Worldwide – now owned by WPP Group.

M&K Creative becomes the latest design group to hit the wall and announces it is closing its doors. Design director Astrid Martin had already set up Martin Design, while the production side of the group is woven into TGA Chapman in Halifax.

Shelter, the homeless charity, paves the way for change with the appointment of Johnson Banks to review its branding and corporate literature. The design group collaborates with ad agency Hooper Galton on the project.

Plans for the V&A’s £12m Theatre Museum are unveiled, including exhibition work by Event Communications. The hope is for construction to begin in 2005.

Vince Frost announces he’ll be moving to Sydney to join forces with Emery Vincent Design in a venture called Emery Frost. Frost Design will continue in London with the creation of four partners to run the show, though Frost himself retains the role of chairman.

The winning identity for the controversial London 2012 Olympic bid is unfurled at Tate Modern.

Paul Stead, former chief executive of Fitch Worldwide, announces a return to the design fray with a start-up consultancy called The Brewery. The group is being set up with Tangerine partner Peter Phillips.

Plans for a six-figure branding project for the Battersea Power Station development see the light of day. Three major branding groups are secretly shortlisted for a summer 2004 pitch.