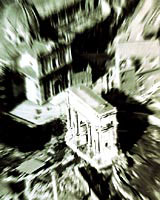 The Estorick Collections’ forthcoming exhibition of Italian Futurist photography is a posthumous leap into the disturbing realm of “militarism, patriotism, the destructive gesture of freedom-bringers, beautiful ideas worth dying for, and scorn for woman”. This is just a friendly taster of a host of spectacular calls to arms as defined by the Futurist Manifesto, published in Le Figaro in 1909. Not high on the agenda at the average peace rally, perhaps, but a disquieting prick in the politically correct contemporary art bubble – hopefully not meant to leave you feeling too deflated.

If you’ve never ventured to the oasis of all things Italian and arty in London’s Islington (the gallery and gardens are worth a visit in themselves), get yourself over to Canonbury Square quick-sharp to check these guys out. This is the first exhibition of its kind in the English speaking world – it takes some gumption to celebrate a bunch of boys (and one girl) with very dubious political leanings – but pays timely homage to the creative fervour borne out of a turbulent moment in European history. If nothing else, the images themselves are dramatic, unsettling and surprisingly fascinating.

Futurism was founded in 1909 by Filippo Tommaso Marinetti in an attempt to re-think life in the fast-changing, technologically driven context of the aftermath of the Industrial Revolution. It represented a direct relationship between art and politics, and encompassed many spheres, from painting to performance, literature to photography and architecture to lust.

Art was perceived as technological warfare, and propagandist performances would often end in pandemonium. It also generated a new kind of artist, whose studio work was possibly less pronounced than the individual persona, and authorship reigned. The photographic portrait was therefore extremely significant, and the movement generated official group portraits, self-portraits, self-multiportraits, photodynamic portraits, polyphysionomical portraits, double self-portraits and photo-performance portraits. This was self-examination and self-promotion to a level that makes Tracy Emin seem positively reticent. The Futurists started a tradition of group photography sessions of avant-garde artists that appears to be without precedent and has continued to have a presence.

Equally relevant to the contemporary zeitgeist was the Futurist preoccupation with speed (“Time and Space died yesterday. We already live in the absolute, because we have created eternal, omnipresent speed”), manifested most directly in the practice of photodynamism; a technique which created a highly atmospheric, instantaneous image of motion in a single photographic frame. The appearance of moving objects or figures assumed a transparency, as in Filippo Masoero’s Dynamised view of the Roman Forum. The technique played a significant part in endorsing photography’s newfound status as “art”, and appealed to the Futurists’ ideology of urban modernism and technological progress. These photographs are remarkable in their uncanny ability to capture movement in a still, and are wild and wonderful, even a century later.

It seems that Futurist ideology eventually crashed along with its partner in crime, Fascism, but clearly its tenets and practices have been absorbed and re-styled. Marinetti opposed any celebration of the past: “For too long Italy has been a dealer in second-hand clothes.” It’s ironic that the Estorick Collection should look back at this frenetic and reckless historical moment that has endured, despite being designed to self-combust. I suspect Marinetti might be turning in his grave.

Futurism and Photography, curated by Giovanni Lista, is at the Estorick Collection, 39a Canonbury Square, London N1, from 24 January to 22 April, Wednesday – Saturday 11am-6pm, Sunday 12pm-5pm. Admission is £3.50

Some mothers wish that they hadn’t had ’em