He may be less well known outside design circles than Philippe Starck, but Javier Mariscal belongs to that same privileged clutch of designers who can genuinely claim to be multidisciplinary. His output over the past four decades has ranged from identities, graphics and illustrations to TV commercials, furniture, exhibition design, sculpture and interiors.

In the UK, Glasgow’s Lighthouse Centre and London post-production company Framestore are graced with his identities, and he’s done the exhibition design and graphics for his own Design Museum show this summer. What’s more, Mariscal’s portfolio is continuing to expand. He’s now putting together his first feature-length animated film. ‘I feel comfortable in whatever discipline,’ he says. ‘I like to change every day, to have new challenges, to confront new projects and solve all sorts of problems.’

All this makes Mariscal (Chavi to his friends) interesting as a practitioner, and as a subject for review – at least in the Design Museum’s eyes. Museum director Deyan Sudjic sees him as being on the brink of mainstream appeal at last.

‘Mariscal has always wanted to have reach beyond the design crowd, and while he has been much celebrated within these circles, this exhibition aims to introduce him to a new audience,’ says Sudjic. Sudjic believes that it is the film, which debuts at next year’s Cannes film festival, which will pull this off. ‘He is very much at a crossover point in his career, between design and the mainstream.’ 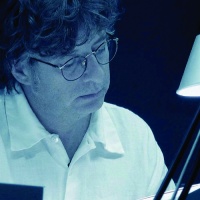 Called Chico y Rita, the animated love story is set in 1940s Havana and 1950s New York. Mariscal talks of the contrast between the relaxed, sensual Latino scenes and ‘cold New York, and it will also have car chases and gangsters’. But to suggest that he is sitting in front of a computer screen, painstakingly drawing it out frame by frame, is misleading. In fact, he doesn’t even have a computer on his desk. Instead, he does everything with pencil – or better still, a Japanese paintbrush and ink – and paper. These sketches are whisked away by one of his 40 or so mostly young – and aesthetically pleasing – Estudio Mariscal staff, who then scans them into a computer to turn them into a working concept.

That’s how his designs for Barcelona wallpaper company Papeles Pintados were created. ‘It wanted something very Mariscal, and that meant a Japanese paintbrush and ink,’ Mariscal explains. And, of course, it’s the quirky repeated chair design that feels the most in character for him.

Likewise, the design for a permanent sculpture at the new Rio Hortega Hospital in Valladolid, which went up last summer. The 170m-long pergola is made out of huge metal chairs, Mariscal’s version of a shady tree-lined avenue.

Mariscal’s computer-less style of working illustrates, perhaps, a generation gap between him and younger creatives. Post-1992 designers (who emerged after the excitement and then slump which followed Spain’s Expo and Olympics year) are a different breed from their famous 50-something predecessors, Alberto Lievore, Jorge Pensi and Mariscal. As a rule, they’ve studied abroad, their numbers swelling the postgraduate courses of London’s Royal College of Art and Central St Martins College of Art and Design, and they are keen for a piece of the international action.

Estudio Mariscal operates from Palo Alto, a 19th-century converted tannery complex in Barcelona’s Poble Nou district, which is now home to around 20 creative businesses. In fact, Mariscal – a nature lover – was this industrial-chic idyll’s first occupant in 1989, and it was he who planted the kitchen garden and dug the small fishpond.

Barcelona is the place to be, as evidenced by the number of designers who base themselves there. Mariscal hails from Valencia, Martin Azua from the Basque region and Jaime Hayon from Madrid. ‘Barcelona is the creative heartbeat of the whole thing,’ says Viviana Narotzki, senior research fellow in the history of design at the RCA. Her book, La Barcelona del Diseno, examines design in Barcelona from the 1960s to the present day.

As to the suggestion that Mariscal may be having a renaissance, the man himself is dismissive. ‘For my professional career to have a renaissance, I’d have to have died first,’ he says. ‘As far as I’m aware, I’m still alive. Very alive.’

Drawing Life is on at the Design Museum, Shad Thames, London SE1 from 1 July to 1 November