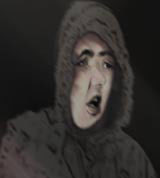 Chris Shepherd had two objectives with Dad’s Dead – the first was to evoke his teenage memories of Liverpool, the second was to make a film nobody would like.

Like JoJo In The Stars, this short is very much an insight into one person’s imaginary world. In this instance, it’s a vision of urban hell. A story of childhood hero worship, betrayal and violence is told in fragmented flashback, blending live action with digital animation. At times, it makes for uncomfortable viewing. Fittingly, it’s not only nominated for Best Short Film but also Film at the Cutting Edge.

Shepherd tried a different tack for his new short. ‘In most of the stuff I’d made prior to Dad’s Dead I had always tried to make people laugh, so I had this idea of drawing the audience in, then beating them up,’ says Shepherd.

The irony is that his exercise in alienation has been by far his most popular work to date, winning 11 international awards, receiving a glowing response from the advertising world (it triggered off a commission from Loan Direct), and striking chords in the most unlikely quarters.

Visually, it is highly original and daring. ‘I built it up like a painting,’ explains Shepherd. ‘I’d shoot some scenes, do an edit, then reassess what I was doing, re-work it. I did six shoots over six months.’

At present he is working on a couple of shorts, one low-tech drawn animation, the other live action. ‘I’m not bothered about making things too clever technically,’ he explains, ‘although I would love to do a hybrid feature, mixing in live action, digital and drawn animation.’