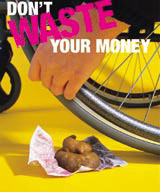 Manchester design group Fudge Studios has created the identity for local authority Bolton Metro’s anti-litter campaign, which launches at the end of April.

According to group director David Eccles, the work encompassed the creation of artwork and the strapline, ‘Don’t waste your money’. This will be applied to educational literature distributed to schools and businesses throughout the area, after initially rolling out across city centre advertising.

It is also expected to be applied to Bolton Metro bins, refuse sacks and bin wagons, as well as tags on the uniforms worn by the Commercial Services Enforcement Team.

According to Eccles, the campaign precedes the introduction, in June, of a £50 penalty for littering. Bolton Metro estimates that ‘environmental crimes’ now cost residents of the borough £2.5m a year in clean-up costs.

The Fudge Studios-designed identity features graphic depictions of the consequences of littering over a ‘highly visible’ orange background.

‘Our approach was to create something different that stood out and communicated the message, something that people would remember,’ explains Eccles.

The group won the work, worth a five-figure fee, after a three-way, unpaid creative pitch in January.