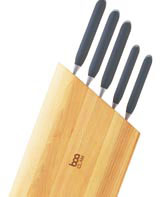 From the time when an Englishman’s home was his well fortified castle to today’s obsession with interiors and DIY, we’ve always been, and happily remain, a nation of homebodies.

But as we move into the 21st century our homes are changing, and fast. We’re being squeezed for space and every square inch of expensive real estate now needs to be maximised. Technological advances mean products that were science fiction 20 years ago could soon grace our homes. Social changes – an ageing population, smaller households and time-poor, cash-rich consumers – are making an impact on the way we live and the products we use.

What do these changes mean for designers working in the sector? Aesthetically and functionally, what do tomorrow’s homewares products need to offer to satisfy an increasingly demanding audience?

According to a Mintel report published in May 2003, ‘lifestyle factors are paramount’ when designing homeware products.

‘There is a new perception of the home as an extension of the personality and greater emphasis on fashion in the home. Consumers now expect housewares to reflect their own style and aspirations,’ the report suggests.

Hemingway Design founder Wayne Hemingway disagrees. He says he is ‘totally depressed’ at the trend of ‘treating our homes as a fashion statement that should be changed every eight weeks’.

‘That’s not how I see [it]. To me a home is about comfort, a place to shut out the outside world in a style that suits me,’ he adds.

Hemingway believes designers must put ‘functionality and affordability’ before ‘fashion’ and decries a focus on ‘what a glossy magazine stylist says is “so now”‘.

But he finds common ground with Hemingway when he says he believes there is currently ‘a move away from the pretentious and the over-designed’.

‘Authentic is a very important word these days,’ adds Conran. ‘People can spot superficial design. What’s needed are products that do something wonderful and are also lovely objects.’

He cites the Priestman Goode-designed Boa Housewares knife block as an example. ‘It’s simple, but spot on,’ he maintains.

There are now more people over 60 than under 16 in the UK. Baby boomers are hitting retirement age and – though many have high disposable incomes and a youthful approach to life – the inevitable physical realities of ageing must be taken into account.

‘It’s no longer possible to pay lip service to inclusivity,’ says Factory creative partner Adam White. ‘Designers have understood for a long time that something designed to work better for a specific group of people will work better for everyone. This has become centre stage now with [the issue] of an ageing population,’ he adds.

Alsop Architects’ nascent product design team is working on concepts for a series of exhibitions across Europe starting next month. One, the Flower Vase, is a 2m x 1.5m ‘vase the size of a table’.

Capucine Lasen, a member of the product team, says it is part of a conscious move to explore ‘how rooms have changed over time’.

‘[In the past] people had flower arranging rooms or luggage rooms,’ says Lasen. ‘But today people are confined to a smaller space, we don’t have the ability to hold all that space any more.’

She accepts designers must modify ideas to ensure they are useable in modern homes, defining this goal as ‘fitting our dreams into the [reality] of our lives’.

Lasen believes this need to maximise space also means consumers are looking for products with an element of depth. ‘People don’t want design that is too easy to comprehend, too easy to read any more,’ she maintains.

She uses the group’s Pixel table as an example. The table features a highly pixillated detail of an image on its top with the actual picture on its bottom shelf,’ she says. ‘It’s a visual trick and the more you look at it the more you appreciate it.’

Technological developments mean designers can now incorporate sci-fi functionality into even the most mundane household product. Hemingway believes ‘most designers seem to forget about technology’, but White calls for a return to a more ‘elemental’ position.

‘It’s tempting to believe products can become ever more sophisticated and technological. But people [are interested] in rediscovering traditional skills and we may end up with more manual solutions, or a more robust evolution that isn’t technology purely for the sake of it,’ he says.

The Nest managing director Alex Willcock sums it up: ‘There will always be a need for the true classics, but designers will also need to deliver, with more wit and imagination, products that will enable people to put a stamp of individuality on their own homes.’