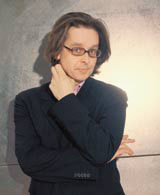 When Pentagram partner Paula Scher said, ‘If you do three brilliant bits of work a year, you’ll be fine’, she didn’t know she was creating a formula for Michael Johnson. Yet this is the guiding principle behind his consultancy Johnson Banks, which this week adds a Best of Show in the Design Week Awards to an illustrious list of prizes won during its 12-year life.

The small, south London consultancy owes this latest honour to the interactive stamps it designed for Royal Mail, an outstanding piece of work that has got through the system after a five-year battle. But the consultancy is no stranger to awards ceremonies, with its colourful leader Johnson invariably up there on stage to collect a prize, sporting trademark longish locks and eccentric dark suit.

Posters and print are the main stock-in-trade for Johnson Banks, most memorably for the likes of the Victoria & Albert Museum, Parc La Villette in Paris and institutions such as the Labour Government, the British Council and the Design Council. But it also has digital design projects under its belt, thanks to a commission from La Villette, and is now veering more towards identity, with work for homelessness charity Shelter going through the studio.

Johnson has always stood up for creativity, which is perhaps what earned him the presidency of British Design & Art Direction in 2002 at the relatively tender age of 38. Before becoming president, he served on the D&AD committee for four years, and co-curated (with Professor Jeremy Myerson) and designed the Rewind show and book, which charted 40 years of D&AD Award-winners. Fascinated by the history of design, he is ‘infamous’ for having a complete set of D&AD Annuals, as well as most of the other seminal tomes on graphic design.

Johnson takes awards very seriously and he is good at getting a result – ‘I learned early on that you have to do excellent work and get it seen,’ he says. But he maintains he didn’t set up Johnson Banks to be an award-winning machine. Indeed, his team’s many accolades haven’t always endeared him to his peers and as a result one year he opted out of all contests.

Harriet Devoy, formerly with Johnson Banks and now creative director of The Chase London, attributes ‘old long hair’s’ success partly to the fact that ‘he employs very good people’. ‘It’s about him as an individual. He keeps tight control on everything,’ she says. ‘Clients buy Michael Johnson.’

Fundamental to Johnson’s success, she adds, is his ability to resist growth. ‘Instead of taking on teams of people, he collaborates with specialists.’ He needs people to challenge him and he wants a project done well whatever its size and if that takes time, so be it, she adds.

Despite making it to the top of his profession, Johnson didn’t follow a conventional route into design. He studied marketing and visual art at Lancaster, before taking a job at Wolff Olins – as a consultant, aged 21.

But it was travelling to Australia and a three-year stint in Japan in the mid-1980s that made him a designer, he says. It also taught him that life isn’t always what it seems.

‘I went to Australia because I needed to be a graphic designer,’ he explains. ‘It took me a while to find my feet.’ But on his return to London, it didn’t work out quite as planned. His first job was at Sedley Place – ‘I was fired because I didn’t know what to do’ – then he moved to Smith & Milton. ‘I effectively took over the corporate bit,’ he says, ‘because Jay [Smith] was in the baby zone.’ Projects were for Tate & Lyle, NatWest and Sky, among others, but in 1990, as recession bit, ‘things began to go pear-shaped’. He faced the choice: ‘design a Radion [detergent] pack or leave.’ He left.

Six months on his own elapsed before Tom Banks, his former client from Legal & General, came to him with ‘a cash cow kind of job’. ‘I have always had beautiful jobs, beautiful ten granders, but not enough cash cows,’ says Johnson. So Johnson Banks was set up with the twin aims of ‘doing good work and making money’.

Banks quit after just two years, by which time Johnson was 30.

Johnson reckons he spent his 20s learning, working with other people. ‘If you make it in your 20s, you burn out,’ he maintains. ‘You spent your 30s making it – or not – and your 40s consolidating.’

What sets Johnson apart from most of his peers is that he is good with words, and uses them, combined with visual wit, in his work and on public platforms. If teaching at Kingston University and Glasgow School of Art weren’t enough of an outlet, his book Problem Solved was published in 2002, just ahead of Rewind. His love of words also shows in his posters for the British Council, among others, and in his own personal style.

Johnson Banks is one of the design industry’s strongest independents in terms of creativity. But that reputation doesn’t necessarily help the group win work. ‘It’s tough out there, quite savage,’ says Johnson, citing ‘the £500 pitch’ favoured by Government quangos like the Design Council for which he has worked. And, after a series of long-term relationships with the Design Council, Carlton TV and the V&A, Johnson Banks is now ‘experiencing churn’. Hotly pursuing new long-term relationships, he has just returned from Japan and is hopeful about a couple of pitches.

However tough it gets, though, we can expect Johnson to hang on to his independence. In the past he’s ‘talked to’ Pentagram, the late Marcello Minale and Lambie-Nairn about possible link-ups, but for him collaboration has a stronger appeal. He lists digital group De-construct, exhibitions specialists Casson Mann and Met Studio, with which he is working in Japan, architect Wilkinson Eyre, naming group Watermark and job ‘broker’ Circus among those he has partnered in the past. ‘Collaboration is now our modus operandi,’ he says, ‘partnering whoever is best at what they do.’

He is also a great believer in integrated design, with design groups and ad agencies working together. It was his rallying cry as D&AD president, and manifested as a new cross-platform category in the D&AD Awards. Meanwhile, Johnson Banks is working on the Shelter project with ad agency Hooper Galton and is angling to get a second stab at Yellow Pages with ad agency AMV.

But what really is missing, he says, are the right clients. ‘There is a lack of visionary clients and what seems to be suffering is graphic design. The desperation of publicly owned consultancies to win work is formidable,’ he says, citing one instance where a publicly owned group spent the entire £40 000 budget for a prospective job on the pitch.

He is equally scathing of many of his ‘creative’ peers and the relative newcomers he terms the ‘young fogies’ who are ‘struggling to throw off the shackles of their training’. These groups, he says, still carry the style banner for their former employers, be it The Partners, Pentagram or whoever. He singles out Graphic Thought Facility and Foundation 33 as among the few that are still ‘doing graphic design as opposed to branding’, though he admits that his favourites tend to be ‘designers’ designers’.

And the future? Setting his own philosophy aside, Johnson is mindful of another of Scher’s rules: ‘Ten years in any business is always difficult. If you make it to 12, you’ll be fine.’ By that reckoning we can expect to see more of Johnson Banks.

Bolton looks to the Fudge factor