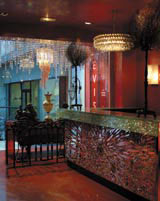 As the escalator ascends to the contemporary menswear department at Selfridges in London, a beguiling sight meets your eyes. Just across from the exit, a mirrored and jewel-studded shelving unit swoops around a treasure trove of clothing and curios.

Moths and butterflies in display cases, plus mounted fish and antlers dot the space. In the corner nestles the piÃ¨ce de rÃ©sistance: a cowhide-covered dressing room, complete with funky chandelier.

The space belongs to cult Japanese jeans brand Evisu’s first European concession, and it is the opening salvo in the label’s march on the Western market.

Last month Evisu opened a four-floor ‘metropolis of denim’ on the chic Rue du Faubourg St HonorÃ© in Paris (DW 8 January). This will be followed later this year by a shop on London’s Savile Row; an on-line store; and, in 2005, a store in New York.

Evisu is clearly intent on giving the stalwarts of the denim world a run for their money – all in one go – but Sam Rosich appears admirably calm about it all.

As marketing manager, Europe for Evisu International, which manages the brand outside of Japan, she develops strategies for Europe and the US. Overseeing fashion shows, retail development and point-of-sale materials for both markets is also part of her remit.

Rosich – who can’t be much over 30 – shoulders a lot of responsibility and is also fiercely committed to the brand. She has been involved with Evisu since it was first introduced to Europe in 1994, when she worked as a retail assistant at a central London store that stocked the product.

‘I remember having to explain to people what Evisu was all about. Nobody had heard of selvedge denim [vintage-style denim made from shuttle looms]. They certainly weren’t going to buy a pair of jeans for £300,’ she says.

Rosich is undoubtedly the right person to represent Evisu in the West. Australian by birth, she has spent long periods of her life in China, Japan and England and speaks ‘fairly good’ Japanese.

And, fittingly for someone who works in high-end fashion, she also has a keen eye for design.

On the day we meet, Rosich is wearing Top Shop and Tatty Devine rings, and top-to-toe Evisu. It was also Rosich who spotted, and then enlisted, Hassan Abdullah to design interiors for Evisu’s Paris shop and the Selfridges concession.

Rosich, who has yet to commission a designer to work on the London and New York stores, concedes that her appointments often arise out of unplanned and unexpected ‘connections’ with designers’ work.

But, she adds, a good understanding of Evisu’s ethos can tip the balance in a designer’s favour.

‘A big part of my job is commissioning the right people and then persuading them to work in our way, which is particularly different. I think the important thing is that I’ve got to feel comfortable. That means [the designers] have to understand the brand. They can only do that if they’re good listeners,’ she explains.

Evisu International is, indeed, a ‘particularly different’ kind of company. With its headquarters initially located in Italy, but now situated in Hong Kong, it has a palpably pan-global feel.

Yet at the same time, it maintains strong links with the Japanese side of the business.

‘Even though we’re international, we’re at heart a Japanese company. I still work for [brand founder and owner Hidehiko] Yamane, who looks after Evisu in Japan. He still generates all of our ideas and [directs] where we’re going,’ says Rosich.

Yamane, who trained as a tailor before trying his hand at importing vintage clothing, launched Evisu in Japan in 1991 after struggling to find a high-quality pair of jeans. That search for perfection resulted first in Evisu’s vintage-style Heritage Collection and now extends to a range of shoes, T-shirts, sweats, hats and scarves.

Eyewear, a spa range and children’s clothing, will be added to the mix within the next 12 months.

Looking ahead, Rosich says she hopes the brand will ‘grow and prosper’, both in terms of reach and recognition. ‘I’d really like, one day, for people not to ask me how to say “Evisu”. It’s just that fashion thing: the idea that those in the know will know how to say it.’

For the record, then, it’s EV-isu and it’s the name of the Japanese god of money.