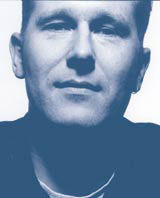 This is a sorry tale of unbridled, uncontrollable lust. Even as I write, my hesitant fingers are caressing the object of my desire. I’m gazing at it, enraptured by its form, becoming slowly familiar with every small, perfect detail. There’s a kind of glorious inevitability about our relationship. Over the next weeks and months, the two of us will become one. We’ll spend hours of quality time together, experiencing delicious highs and pitiful lows. We’ll work, play and plan our future together. We’ll travel the world, but we won’t actually leave the room.

It sat in its box for over a week before I had the chance to open it. The moment had to be right. Our first encounter had to be a long, lingering, and satisfying one. I wanted to fully experience the sensation of slowly undressing it, appreciating the finer points of its beautifully considered packaging, its squeaky new-ness. But as I frantically worked away on my old computer to clear some time, the photographs on the box kept calling to me like some enchanted Siren’s song.

These abstracted close-ups, shot against a white background, provocatively suggested the shape and texture of the iMac. Its glinting silver elbow contrasting with the frosty white plastic, its flat, moveable screen a window full of promise, its very ventilation holes an aesthetic statement. But even the rather blatant full-frontal portrait failed to do it justice.

It was only when I finally succumbed, and with rather more urgency than I’d intended, pulled it from its nest, I realised the full extent of its allure. It just made you want to touch it, to tinker endlessly with the position of the screen, to discover all the relevant holes for the relevant plugs, to admire it from every conceivable angle. The bulbous, plastic speakers were surprisingly, but satisfyingly weighty, the mouse like a white pebble smoothed by the sea, the white dome – which has led one of my more fanciful friends to rechristen this marvel an iBoob – adorned with an Edenic silver apple.

And I wouldn’t want to be accused of being shallow, of falling for pure looks. Mac OS 10, as those of you out there already using it can testify, is a revelation too, far more streamlined and sophisticated than its predecessor. I’d been a little timid about taking the plunge, but now I wish I’d committed months ago. The dock, which magnifies as you scroll down, is inspired, and the way the ‘3D’ buttons slowly pulse as they wait to be clicked is a wonderful touch too.

So how do Ive and his colleagues do it, time, after time? In a recent interview, he was quoted as saying the key to their success was the ability to ‘suspend for a moment your knowledge, your understanding of the product and its use, to look at it with an almost child-like inquisitiveness’. To think outside the beige box in other words. To ask the obvious questions. To break away from the basic preconceptions. But also to embrace simplicity and ingenuous delight.

Apart from rescuing Apple from the doldrums, the first generation of iMacs, which appeared in their funky, fruit-jelly flavours around six years ago, showed us that computers didn’t have to look like computers anymore. They could look the part as props in the best interiors magazines, as sleek and aspirational as any hi-fi or home cinema system.

And while the Dells and Compaqs of this world, that sell in such vast quantities to the business community, still aren’t particularly interested in the broader cultural appeal of their products, others have been taking a distinct interest in what Apple has managed to achieve in recent years. IBM has been reminding people of its impeccable design heritage, and Sony, taking a lifestyle rather than a computing approach with its Viao range, has given PC users something a bit different to think about.

As microprocessors become smaller and more powerful, there will be fewer constraints on what our computers look and feel like. Designers can then concentrate on developing personality, emotional and brand resonance in their products, and to target particular segments of the market with differently styled machines. It won’t be ‘you are what you wear’, so much as ‘you are what you wordprocess on’.

One last confession. When I bought the iMac, I asked – after hesitation – for an iPod too. But I haven’t dared to take it out of the box yet. I’m not sure my marriage could stand it.

Time for the big smoke to dig up the tram lines