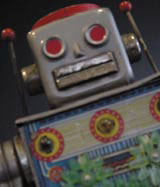 Arthur C Clarke’s vision of 2010 might come true if designers at Toyota have their way.

Press reports say the car maker is setting up a futuristic humanoid robot division at its production technology headquarters in Shizuoka, Japan.

Toyota is apparently aiming to have real life C3POs walking by 2010. They’ll be used to make industrial robots, as well as helping the elderly and physically disabled.

Wasn’t that the excuse they used to build The Terminator?