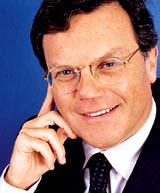 Both Sorrell and Young & Rubicam chief executive officer Tom Bell are confident the deal will be hugely beneficial to the expanded company. “We will be the leader in the communications services industry,” says Sorrell. “It puts us in a premium position to capture new economy opportunities and gives us a unique breadth and depth of talents and resources.”

“The big challenge is attracting, maintaining and motivating talent, but it will become the preferred place to work,” adds Bell, who will be stepping down once the merger has been completed. “The fit between our companies is terrific, with leading brands in every marketing discipline. Y&R clients will benefit from access to new capabilities as well as the additional reach and clout that we’ll enjoy in the marketplace.”

Most significantly for the design industry globally will be the addition to WPP of Landor, which will now become part of the same stable as its long-time rival Enterprise IG.

Landor’s recent international senior management restructure and the fact that both groups have offices in no less than eight of the same cities worldwide, throws into question the futures of Landor and Enterprise IG. Will one be swallowed by the other and how will they work in tandem?

Although leaving open the possibility of mergers between other groups within the WPP empire, Sorrell is adamant that Landor and Enterprise IG will be kept separate with no pooling of resources.

“I have long admired Landor as the strongest brand and it has done painfully well,” he reflects. “But we have a vigorous competitive outlook and pitching will be encouraged. I don’t want one tribe.”

Both Landor and Enterprise IG are equally confident the two will retain their individual identities. Charlie Wrench, general manager of Landor’s London office, describes a merger with Enterprise IG as “very unlikely in the medium term”.

“The implications for Landor will not be considerable. WPP won’t be in any more of a hurry to merge Landor and Enterprise IG than he [Sorrell] was with Ogilvy and J Walter Thompson. History shows that when Sorrell buys a brand he is not in a hurry to dissipate it,” says Wrench.

However, he refuses to rule out the possibility of an alignment between the two in the future. “If there was to be a merger, I’d think it would be with Landor as the predominant part, as it is the pre-eminent brand of the two. Together we have more access to tools than we did previously, which we can benefit from on a global level, but I expect us still to pitch against Enterprise IG.”

The same view is adopted by Enterprise IG chief executive officer Dave Allen. “From a market point of view it will be business as usual. You would be crazy to take choice out of the marketplace,” he explains.

Highlighting the significant difference in size between Landor and Enterprise IG and the other leading global design groups, Allen warns of the danger of outsizing the market, were a merger to happen. “There is the potential that we’d be too big for our sector. So it has no logic to it,” he says.

Ticegroup chairman Ian Cochrane, an independent management consultant and former business affairs director at Landor, sees the addition of Landor to WPP as a big plus. But he outlines several reasons for not combining the two groups.

“It gives WPP another excellent corporate branding business with a different client base. Each is very strong in its own market. Landor is further up the creative curve, while Enterprise is further up the strategic curve,” he says.

“But it would not make sense to bring them together, because they are both strong brands with a lot of goodwill attached. Second, it gives the opportunity to get around the client conflict, and third, they are very different organisations culturally. There are the added pressures facing them as public companies, too.”

Cochrane cites as a cautionary tale previous high profile design acquisitions, describing some as not being wholly successful. “I would have thought the cost savings of merging Landor and Enterprise would be marginal, though considerable effort and investment would be needed. Either way, you still need space for people,” he adds.

Though the futures of Landor and Enterprise IG appear to be the same as they were before the acquisition of Y&R a week ago, Sorrell is the first to admit that “you see alliances in areas of business where previously it would have been unthinkable”.

If this is the case, maybe it is only a matter of time before these two giants of the design world move into this “unthinkable” area.