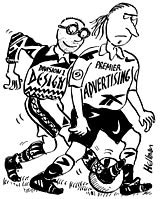 Design has always suffered from an inferiority complex when viewed in relation to advertising. We taunt ourselves thinking that advertising agencies sit “at the top table” with the clients while designers pick up the crumbs and, certainly in terms of perceived importance and budget allocation, we have a case.

But this second league status is perhaps attributable in the main to our streaming in the “below-the-line” category of marketing. That is, short-term and sales stimulating. By comparison our clients are still indoctrinated in the belief that advertising is “above-the-line” (long-term and brand building), and so far it has been a challenge to overturn that point of view.

However, the fall-out from global media fragmentation may have inadvertently presented us with an opportunity to speed up our promotion from division one to premiere league (although maybe not quite in time for next season).

With slashed media budgets, many brands today have to live without significant advertising support, and where it is used, advertising seems ever more responsive and tactical in its nature. Coupled with the ever-shortening life-span of your average campaign, you can see that design – by which I mean packaging, corporate identity and retail design – is picking up the mantle of the most visible and constant manifestation of a brand.

Back in the advertising heyday of the 1960s and 1970s the role of design was really little more than to trigger the values created via advertising: Oxo, Benson and Hedges, and Clarks Shoes are prime examples. Through the 1980s and 1990s our industry woke up to the idea that brand personality or essence could be expressed via design. But now as we look to the future, it will have an even greater role to play. Clever brand design (again I mean in its broadest sense) will increasingly have to entertain, challenge, and provide the sort of sensory experience previously fulfilled by advertising.

That is why retailers which create theatre – like Nike Town, Space NK and Aveda – are succeeding on the high street. Likewise companies that challenge our expectations of corporate identity, such as Framestore and BBC2, end up being talking points. And packaging has demonstrated that it can make you covet things like Harvey Nichols; smile at things like much of the Superdrug portfolio; or involve you in things like Toblerone and Dime’s recent use of an anagram.

New communication channels such as the Internet and digital brand identities have both graduated from a design base and have accelerated our industry’s climb up the ladder of perceived importance. While a great many of the early Web solutions have clearly tried to run before they can walk, the ones which will ultimately succeed in the long term are invariably those routed in a solid conceptual foundation, from a branding viewpoint, coupled with an intelligent usability.

Interactive TV is the next great opportunity for the design industry to prove that the years spent in branding apprenticeship have not been wasted, and that, as an industry, we are just as convincing as our advertising brethren when it comes to caretaking and promoting brands.

Another area where we can demonstrate our value is home- shopping. As point-of-receipt or point-of-use replaces point-of-sale, packs will no longer be scrutinised in terms of “on-shelf beauty contest”, and there will be more emphasis on how we react with things in the home. Structural design and ergonomics will graduate to assume new, weighty responsibilities.

But the focus of my argument is not that design has necessarily become more important than advertising, or that it can do a similar job – it can’t. The enormous changes happening in the world of communication mean that we can and should be prepared to tackle a new set of demands: in short, we can deliver far more than styling or aesthetics.

As the centre stage beckons, we must use our experience to best advantage and make sure that we perform just as well as British advertising has done in the past. Channel 4 recently screened a programme devoted to Your Top 100 AdsÃ­ where nearly 10 000 people voluntarily voted on campaigns which worked their way in to the nation’s hearts. Let’s hope that by the year 2010, we might aspire to a similar screening of Your Top 100 DesignsÃ­ with a similar understanding and support from the general public.

Who knows, maybe design could end up being the new advertising.

Amec has a 3D transformation