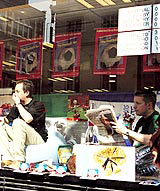 Realising their team faced certain defeat at fortress Highbury away to Arsenal last week, Chelsea fans Tim Rich and Jeremy Sice instead opted to spend the day in the shopfront of Borders on Charing Cross Road publicising their new book – The Extraordinary World of the Football Fan.

As you will notice, the photograph has been taken before Thierry Henry scored the first of his two goals in the Gunners’ 2-1 victory.

Rich, a DW contributor, explains ‘the pics from later in the day, as the temperature soared to 47 degrees and Henry knocked ’em in are less, er, positive and upbeat.’