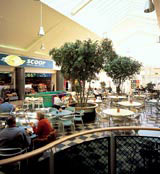 Imagine repositioning a 47-strong business from a catering company locked in a 1960s time warp into a fast-moving retail operation. Granada Motorway Services brand development director Paul Kelly is overseeing this evolution and is investing £250m into the changes.

It’s all about getting existing customers to spend more, because the market is very mature, and there will be no new sites. “Now we invest to accumulate,” says Kelly. So Granada is looking to tap into as yet unexploited sectors of the motorway-going public. Commuters are one such audience, for whom it has launched Workspace this month. Aimed at the increasing number of business people on the road, Workspace comprises hot desks, Internet access, secretarial support, meeting rooms, a lounge area, changing rooms with showers and a food offer.

Granada has done the maths. Half of all the two billion annual motorway journeys are made by commuters, yet only 3 per cent of these stop at motorway services.

The very location of roadside offers is seen as a vast and mostly untapped opportunity, and Granada is determined to fully exploit this. At the same time, the company is realisitic about the limitations. “In this environment, people are location loyal rather than brand loyal,” says Kelly.

Granada doesn’t hang around. After putting new management in place – including Kelly – two years ago, it has rebranded and introduced new branded concepts to its existing motorway service stations, built a new one from scratch, and started refurbishing the others.

And pretty much all this rebranding has been led by Jill McArdle, a strategic development director at BDG McColl. Kelly also knows the group well as he was poached by Granada just as the WPP Group group bought the Principles Group to merge it with BDG McColl. “Granada is a very aggressive commercial company, we like a 20-25 per cent return on our investment and BDG McColl understands that,” says Kelly.

Once these changes are in place, Pentagram’s big red G logo will be replaced. It may be unconventional to tackle the identity after rather than before, but Kelly sees it as delivering the promise before the visual rendition.

Kelly admits GMS had a negative image, with MSAs in general suffering from a “Carry On Motorways” perception of over-priced, poor quality food, facilities and services. Granada was still thinking of its customers as either car or lorry drivers, rather than as specific markets. This meant that any effective consumer targeting was virtually impossible.

Add to that the improved comfort of vehicles and drivers were not stopping at MSAs as often as they used to. So they tend to be used for distress stops, says Kelly – not an atmosphere conducive to parting with lots of money. “It’s about de-stressing all these activities to make the customers stay longer,” he says. The average MSA stop, excluding time for fuelling, is just 17 minutes. Again, not much time to lighten the pockets of those passing through.

Architect Broadway Malyan created the Donington envelope, with BDG McColl designing all the interiors and Lighting Design Partnership doing the lighting. Kelly wanted to create an internal streetscape, based around a hub or pause point rather than a linear row of offers. This also reduced the need for signage.

The repositioning was about creating a modern airport-style environment, with shopping and Internet access, where offers could be focused on specific groups. “MSAs need to be thought about as communities in their own right,” says Kelly. He wanted to create a friendly experience, where the consumer was in control.

The new-build MSA at Donington, which opened last year, was the opportunity to question 25 years of the MSA philosophy – questions like why couldn’t you have a decent offer in the food court, and could you create a better landscaped environment.

With the introduction of more outside retailers, Granada’s own retail offers needed to be revisited. It was no longer good enough for the shop just to be called Shop when it was up against 83 high street retail outlets, including the likes of Knickerbox, BHS and Thorntons. “The Granada Shop had to have a brand that looked as if it belonged in the high street,” says Kelly. “People like the fact that an offer likes to look like a high street brand.”

BDG McColl took this in hand, coming up with branded offers for the restaurant and cafÃ©, as well as the shop, now called Scoop.

The challenge for BDG McColl with the self-service restaurant was to make it work 24 hours a day and convince people that it’s a quality product. The brand Fresh Express was introduced, along with a food court-style layout. The consultancy also reviewed display and point-of- sale language, introducing the vernacular of the grocery sector. The new point-of-sale material was created by Granada’s local group The Finer Detail. The product range was also reviewed, with a Tesco’s Finest-style premium offer introduced called Special Selection, and a blue and white branded Fair Deal, which was created by Design Motive. “We have pushed the top and bottom of the price band,” says Kelly.

And already Granada is reaping the rewards; the Fresh Express concept has arrested five years of decline, developing transaction growth by 1-2 per cent and sales growth by 6 per cent.

Granada is one of the country’s biggest petrol retailers, so the forecourt shop is another opportunity to generate income. Kelly decided to put the Fresh Express brand on the petrol forecourt as a convenience store, rather than let an oil company have the retail space. “We looked at Statoil’s brand Mango in Sweden, and the thinking comes from there,” Kelly says. Sales at the rebranded shops have increased by up to 40 per cent “because the offer is credible and it doesn’t say BP or whatever over the door”, says Kelly.

The amusements are another area that BDG McColl looked at. “How do you take that offer and make it more family friendly and less threatening, and introduce a degree of branding,” was the challenge from Kelly. G-scape was born, with bright colours and bold graphics, “so it looks like a managed environment”, says Kelly. Add to this list of refurbishments the mother and baby changing rooms, and the work environment Workspace which officially launched this month. “It’s about repositioning the business to be able to go after new markets (like the commuters),” says Kelly.

Commuters are also being targeted with the new 2Go coffee and sandwich offer. Branded and designed by BDG McColl, it is intended to look like an independent outlet. The plan is to roll it out to 35 of the 47 service areas. “It would be very possible to take it out of the MSAs, and place it first at forecourts, and possibly in other parts of the Granada group,” says Kelly.

Whoever wins the identity job will work with the newly introduced strapline “Supporting you every mile of the way.” At the moment, this job is being done thoroughly by BDG McColl.