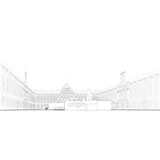 The Crafts Council has appointed Ben Kelly Design to conceive a pavilion structure that will house its inaugural London craft fair Origin, with an identity designed by Pentagram.

Taking place this autumn at Somerset House, Origin replaces the Chelsea Crafts Fair, which has run for the past 26 years. The partnership with Somerset House is the first example of the Crafts Council’s new focus on collaborative programmes, following a cost-cutting restructure earlier this year (DW 2 February).

BKD principal Ben Kelly has developed a structure that will contrast sharply with the 18th century architecture of the Somerset House courtyard. The 1600m2 pavilion will house the work of more than 300 designer-makers over a fortnight, with a handover of exhibitors after the first week.

‘We have tried to design a flexible system, as the pavilion will be used again each year and we may alter some of the finishes and colours,’ says Kelly. ‘We have a footprint and an entrance sequence, but we’re still working on the interior detail at this stage.’

Pentagram partner Angus Hyland has developed a contemporary look for Origin’s visual identity.’The brand name Origin is set in a contemporary sans serif face with the ‘O’ redrawn as a perfect circle. The colour we have chosen is fresh, bold, acid lime. The background may be textured in a variety of forms, representing craft objects and the grid lines act as a counterpoint to background forms,’ says Hyland.

The pavilion’s 4.6m-high front hoarding will display the logotype and will be set in the courtyard so the branding is visible from the main entrance off The Strand. Visitors will enter the structure between the left side of the hoarding and a natural timber wall.

‘We have created a three- dimensional composition using a combination of transparent glass panels and opaque panels in natural materials for the sides and roof of the tent structures,’ adds Kelly.

Origin will showcase the work of designers in glass, ceramics, jewellery, metal, furniture, paper, basketry, wood and textiles. A new satellite exhibition, called Springboard, will give exposure to designers showing their work for the first time and a programme of talks and events highlighting major issues for the crafts sector will also run throughout the fair.

As part of an operational overhaul, the Crafts Council announced the closure of its London exhibition and retail space in February. It said the cost of running the site drained resources from its regional activities, which it now intends to focus on through a series of partnerships with ‘better equipped’ venues, such as Somerset House.

As a result of these changes, the Jerwood Applied Arts Prize was cancelled this year and a venue is yet to be confirmed for its return in 2007. It is thought the two locations currently under consideration by the Crafts Council are both in London.

• Replaces Chelsea Crafts Fair, which has run for 26 years

• Jerwood Applied Arts Prize 2007 venue yet to be confirmed