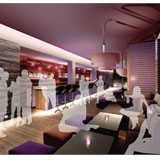 Hard Rock International is aiming to design a luxury-branded Hard Rock Hotel in London, following the opening later this year of its first European hotel. The European flagship, which will be based in Madrid, includes an interior design concept by United Designers.

Hard Rock is looking for sites in London but has yet to appoint design consultancies to work on the project, says Trevor Horwell, vice president of Hard Rock Hotels, the hotel division of Hard Rock International. ‘We are looking in London, but haven’t agreed on a deal yet,’ he says.

Hard Rock Hotels is seeking to grow its portfolio of sites worldwide and is targeting ‘major European capital cities’, as well as potential sites in the Middle East, Australia and Japan, says Horwell. The company aims to launch ten hotels in the next five years. Currently, the group runs 15 hotel venues, most of which are based in the US.

‘We are competing against the likes of Ian Schrager and The Metropolitan hotel. We want to create an urban retreat and our lifestyle concept is very versatile,’ he adds.

The first European Hard Rock Hotel is scheduled to open in September at the renovated Gran Hotel Reina Victoria in Madrid. London consultancy United Designers was appointed to work up an interior scheme for the project in 2003.

At the same time, United Designers is creating the interiors for a Hard Rock Hotel located in New York City.