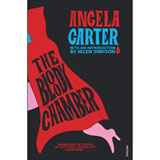 Dutch artist and illustrator Parra (aka Pieter Janssen) has designed a set of Angela Carter book covers. The designs are part of a new series of books to be reissued this summer by Random House.

Six redesigned sleeves – The Bloody Chamber, Burning Your Boats, Nights at the Circus, Expletives Deleted, Love and Wise Children – will be launched at the South Bank Centre on 11 June to coincide with a retrospective of the author’s life and work.

The book series will then be published in July through the Random House imprint Vintage. Vintage editor Elizabeth Foley is overseeing the project.

‘We wanted to make the books much more exciting and up to date. The idea is to reignite interest in Carter and relaunch them to a new audience,’ says Random House senior designer Eleanor Crow.

‘It would be really nice if people who knew Parra’s work got to know Carter’s and vice versa,’ she adds.

Crow says Parra was given a very open brief for the covers, which included just a couple of key lines from each of the Carter texts in the series.

Carter won much acclaim for her collections of adult fairy stories written during the 1970s and 1980s, plus a number of related post-Feminist and magic-realist literary works.