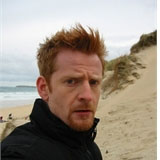 Christopher Oram is a master of atmospheric, unfussy stage design who has made it big in the West End with a series of hit shows. A revival of Evita is next on the cards, says Nick Smurthwaite

Christopher Oram (pictured) puts it all down to Star Wars. After seeing it aged ten at the Brighton Odeon, he started making models of intergalactic fighter planes and space stations, and that was it – when he grew up, he wanted to make models and create 3D fantasies.

Now he is one of the hottest stage designers around, with two of last year’s most acclaimed West End shows, Don Carlos (pictured below right) and Guys & Dolls, under his belt and a big-budget revival of the 1970s musical Evita coming up in June. He has also created costumes for Kenneth Branagh’s film adaptation of Mozart’s The Magic Flute, recently shot at Shepperton Studios.

Oram’s reputation is based on highly atmospheric yet unfussy design, preferring thrust stages and confined spaces to the more old-fashioned, proscenium-arch-style of playhouse you find in London’s West End.

We meet at his makeshift workshop at Shepperton, where he has just learnt that he has three days rather than the promised three weeks to get some costumes ready for a particular scene. There is no sense of blind panic. Instead, Oram shrugs amiably as if to say that’s what happens in his world. ‘I’d rather work through a problem than throw hysterics at it,’ he says. ‘I’ve seen enough people being shouted at in my life and it is usually because the person doing the shouting got it wrong in the first place.’ 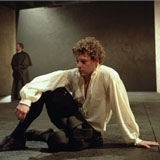 Oram trained at the West Sussex College of Art and Design in Worthing, where his student efforts were admired by the stage designer Paul Farnsworth, working nearby at the Chichester Festival Theatre. He worked as Farnsworth’s assistant for three years, making endless model boxes, before moving on to assist Mark Thompson, Anthony Ward and Ian McNeil, then working with Stephen Daldry, notably on An Inspector Calls and Machinal at the National Theatre.

His first show as designer, a touring musical about Florence Nightingale, was a disaster – ‘I was too young and arrogant to begin to know how to go about designing a number one tour’ – but luckily he was given a second chance with Old Wicked Songs, with Bob Hoskins, which started out at the Bristol Old Vic and transferred to London. ‘They needed someone very quickly. I had two weeks to do everything, but my work was noticed, so I ticked the box for having my first West End transfer before I was 30,’ he recalls.

Although he has worked with the likes of Trevor Nunn, Sam Mendes and Adrian Noble along the way, Oram is best known for some 20 collaborations with his partner, Michael Grandage, award-winning director of the Donmar Warehouse. Their work together on Suddenly Last Summer, Caligula, Don Carlos (for which Oram was nominated for Best Designer in the 2006 Olivier Awards), Guys & Dolls and many others has earned them numerous awards and critical accolades. ‘We work organically,’ says Oram. ‘We don’t have to explain everything because we have a common sense of how things will work. Strangely, we have less in common than you’d imagine, but somehow it all manages to slot in together neatly. He will never get Star Wars, but he gets that I get it. Similarly, I appreciate what he gets out of classical music.’

The Grandage-Oram strategy is to pare things down to a minimum, although Oram insists there are plenty of examples of what he calls ‘non-minimalist’ productions. He is a great believer in the benefits of light and sound, attributing 50 per cent of what he does to the working relationship with these co-designers. ‘The three – set, lighting and sound – are completely symbiotic as far as I’m concerned,’ he says.

Oram seems bemused rather than intimidated to find himself designing two of the most renowned musicals of the 20th century. ‘I saw the original production of Evita when I was in my teens,’ he recalls, ‘so I suppose I’m reacting against that. Ours will be hotter, more vivid, more South American, as if we’ve taken the original black-and-white version and coloured it in.’ 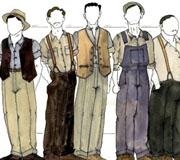 Ironically, he says he is less busy now that he is more successful. ‘Not so long ago, I was doing nine shows a year, now it’s more like two or three. The bigger the jobs, the less busy you have to be. I suppose I may look back on it all one day and think, ‘Oh yeah, that was my career,’ as if it was some kind of unified thing.’

Evita previews from 6 June at the Adelphi Theatre, The Strand, London WC2

Ronnie Scott’s in retune with Garcia and Bloom