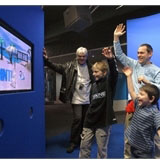 It’s difficult to go to an exhibition without being invited to take part in ambitiously designed interactives. Yolanda Zappaterra asks if the trend has gone too far and too many museums have become dumbed-down playgrounds

At the risk of sounding like a grumpy old git, I no longer enjoy visiting museums. Not having the requisite 2.1 children who need to be amused by tearing round public spaces, screaming as they bash buttons, squawk at screens, clobber computers and stab at switches, I’ve been pushed to one side. Let’s face it, I’m not high on the visitor wish list of what have become response-and family-fixated spaces, ruled by the short attention span of the youngest family member and competing with the likes of Alton Towers to get numbers through doors and bums on (shaking) seats. So, knowing where I’m not wanted, I don’t go to most museums any more.

But I did recently go to At-Bristol, described as ‘the most vibrant waterfront leisure, education and entertainment attraction in Europe’. The requisite two kids loved the high level of interactivity in the space and charged round having a ball, but if, as Dinah Casson of exhibition design group Casson Mann has suggested, ‘the starting point of the interactive is to encourage the skill of looking’, then the At- Bristol experience failed. For the children appeared to be looking and learning very little, and the possibility of interactivity as a means rather than an end seemed to have passed them by. So has interactivity gone too far? Are too many museums just dumbed-down playgrounds for visitors bored by traditional spaces where reflection, thoughtfulness and leisurely discovery take the place of frenetic experience and group activities? 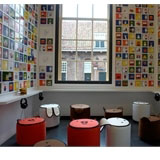 Sherrie Zwail of SZI Design in the Netherlands, which recently created the Dick Bruna Huis for the Centraal Museum in Utrecht, emphatically disagrees. ‘There is not enough emphasis on interactivity in museums. Good interactivity and digital media give an exhibition energy and excitement. We have a responsibility to appeal to many different types of people these days and the reality is that the younger generation views the world differently from people before. Therefore, if we can reach and educate people through their senses, then all the better – as long as the right balance is found,’ she says.

Phillip Tefft, UK Director of exhibition design consultancy Ralph Applebaum Associates, picks up on this idea of creating a better experience through appealing to all the senses. ‘The more we can engage sensory experiences – aural, visual and tactile – the more we can engage the brain, just as using more of the senses does in everyday experiences,’ he explains. ‘One of our most successful efforts in terms of creating an interface that everyone from all ages can connect with is the interactive music table at the Horniman Museum in London, which enables people to access and learn about the museum’s collection of instruments by hearing the sounds they make, learning how they were made and discovering their role in the culture they came from,’ he explains.

Another champion of interactivity is Russell Clark, head of design at the Museum of London. He insists, ‘Interactives are not just for children. We all learn more effectively when the experience is active rather than passive – we tend to remember things that we do much more readily than the things we watch, listen to or read. Interactives are also vital in enabling the galleries to cater for the full range of learning styles by appealing to common-sense learners, who tend to learn by thinking and doing, and dynamic learners, who learn by feeling and doing.’ 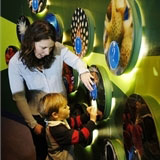 Despite admitting that ‘some of our older visitors would prefer the museum to be more subdued’, Carolyn Chinn, learning manager at the Museum of Childhood in London’s East End, says, ‘Offering interpretation in different forms of media can appeal to different learning styles. It also helps to create variety in the exhibition, which combats “museum fatigue”.’ The museum is undergoing a £3.5m redevelopment (by Caruso St John) prior to reopening in November with enhanced interactivity.

Tim Molloy, head of strategic design at the Science Museum, has more experience than most in this area, and the points he makes are perhaps applicable to At-Bristol too. ‘Unlike those of many other cultural institutions,’ he points out, ‘our objects are not always eloquent, let alone beautiful or friendly. We are often dealing with concepts, ideas and issues for which there may be no objects. In addition, while undoubtedly affecting our everyday lives, the issues we address are not necessarily ones with which we (the visitors) have great enthusiasm. We therefore have to work harder to engage more people. And as a final point, a science museum that doesn’t communicate via the latest technology is not a connected museum.’ 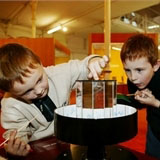 So with both designers and clients in thrall to interactivity, we can expect more, not less. Clark is persuasive when he says ‘interactives, generally speaking, are not particularly good at conveying large amounts of information, but they can be very effective in stimulating people to think or feel in particular ways, to collaborate and discuss, or to develop skills.’ Mollified, but not entirely convinced, I’m off to the lovely, peaceful, resolutely minimally interactive, National Gallery.