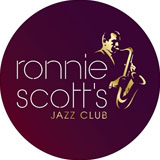 It is the most substantial makeover project to hit the Soho venue in its 46-year-long history.

Bloom has designed a new brand identity – featuring an image of Ronnie Scott himself – which is about to go live. The logo has been conceived to promote a more unified image of the club. It will replace the six previous incarnations of the Ronnie Scott’s brand, says Nick Moss, head of marketing for Ronnie Scott’s.

‘Everyone knows the name, but we didn’t have one image for the club. We had an identity for the Ronnie Scott’s 40th anniversary and a separate identity for its in-house magazine, for example. This logo brings everything together,’ says Nick Moss, head of marketing at Ronnie Scott’s.

The identity will be applied throughout the interior space of the club, branding wayfinding, menus and programme material. It will also be integrated into all the marketing collateral for the club.

Bloom was appointed to the project six months ago, following a pitch against consultancy design group Logan Roberts Windett.

To support the relaunch, Garcia has been drafted in to redesign the club interiors, in part to make the venue more comfortable.

He has created a new look for an alternative lounge bar, Ronnie’s Bar, which will replace its former salsa venue, located above the club. This will have a ‘very cool, sexy, timeless’ atmosphere, says Moss. Bloom is also designing an identity for the space.

The venue has been open since 1959 and has been host to many a jazz legend, including Glenn Miller and Miles Davis.

2005: Bought by Sally Greene, chief executive of the Old Vic and Criterion theatre