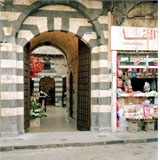 Villa Moda, the ultra-deluxe fashion chain run by young Kuwaiti Sheikh Majed Al-Sabah, has had a conversion on the way to Damascus. Caroline Roux reports back from the new outlet in a converted stable in a souk in the Syrian capital

In late March, unlikely as this might sound, the fashion and design world descended on Damascus. Over three nights at huge candle-lit banquets in scented courtyards – like deluxe wedding feasts complete with entertainment and dancing, but strictly no alcohol – upwards of 200 elaborately turned-out guests gathered. The likes of Vittorio Radice, Marni’s Consuelo Castiglione, Ilse Crawford, Marcel Wanders, Jacopo Etro and two of Bethnal Green’s colourful Trois Garçons dined assorted luminaries of the British and American fashion press as the Syrian and Kuwaiti elite held court. The occasion? The launch of a new fashion shop.

The store was Villa Moda, the fourth to be opened by the Kuwaiti Sheikh Majed Al-Sabah and the first high fashion store in Syria. The Sheikh’s initial Villa Moda, a vast cube designed by Pierfrancesco Cravel and Eldridge Smerin in Kuwait’s port area, caused a stir when it was completed in April 2002 – not least for being a box built entirely out of glass in the desert. The second one is a futuristic homage to 2001: A Space Odyssey, designed by the then creative director Jean-Philippe Evrot. A mini version followed within the Ritz-Carlton in Qatar in 2004, designed by Chris Lee.

‘I see myself maturing in my retail experience,’ the Sheikh said in March, as delighted Syrians crowded the Damascus store for the opening party, vying for exquisitely embroidered Valentino evening bags at $2000 (£1075) a pop. (The Sheikh had personally gone over to Rome, and brought back the bags in his hand luggage.)

The 37-year-old, who has inevitably been dubbed the chic Sheikh and likes to dress in Junya Watanabe jackets and bespoke Puma trainers, might have had all the opportunities afforded a member of the Kuwaiti royal family (his mother was sister to the previous Emir, who died last year). But the words royal and retail make awkward partners. Majed, as he likes to be known, has worked hard to carve a place in the world of his choosing. In spite of his own long-held passion for fashion, certain front-row fashionistas saw him as a spoiled prince trying to buy himself a bit of their glamour. 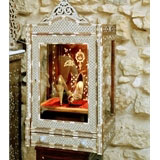 Credibility has come slowly, through the evolution of the stores, his interesting buying habits (five buyers cherry pick their way through the upper echelons of collections to suit Middle Eastern tastes), and increasing co-operation on the part of designers. Domenico di Sole, then chief executive of Gucci, was the earliest to bite, setting up a Gucci franchise with the Sheikh in 1997. The Dubai store saw Prada’s first ever presence in the lower Gulf, and a subsequent project between the Sheikh and Miuccia Prada to create kaftans for Villa Moda was not just a local success – the kaftans also sold out at Prada’s New York Soho flagship.

Designers are seeing the wisdom of being stocked in stores where some customers return three times in a single week, dropping thousands of dollars per visit. Of only 100 limited edition I Spy bags produced by Fendi this season, Majed secured 12. ‘So you can’t get one in Manhattan right now, but you’ll find one in Damascus,’ he beams.

Much of Majed’s success has come from trading against received wisdom. He picks offbeat locations – the port in Kuwait, the souk in Damascus. And he doesn’t rely on the usual retail bread and butter to underpin the business. ‘We don’t stock basics,’ he says bluntly. ‘We are fashion forward. Villa Moda is not the place to come for a V-neck sweater.’ He stocks labels that are extreme in rarity and price, like the fancy Australian marque Caravana. Goyard, the luggage company where a trunk costs $11 000 (£5900), is another favourite.

And then there’s the attention-seeking architecture. ‘That completely glazed building was totally contrary to retail type,’ says Piers Smerin of Eldridge Smerin, which was brought in late in the day to furnish the common parts of the Kuwait store. ‘But it does do some amazing things. You have views of the port and containers, as well as a bit of beach. It’s flooded with that brilliant sunlight – more like being in an airport terminal. On the other hand, people shop late in the afternoon and after dinner – not during the hot day.’

In Dubai, a state full of by-the-yard US-derived shopping environments, Villa Moda’s counters and rails all hang airily from the ceilings and Loop chairs by Barber Osgerby, Eero Aarnio Bubble chairs and Patrick Norguet’s Apollo in bright orange decorate the spaces in between. But whatever the deviation from the norms, the Villa Moda group is now turning over about $50m (£27m) a year.

The Damascus store is perhaps part of a new story, however. A reclaimed 18th century stable in the middle of a souk might sound like charm itself to a European, but to the Syrian elite it is not an obvious destination. Bringing the wealthy back to these ancient streets will change their nature and – while nearby rents will doubtless soar – so will the pistachio sellers’ profit margins.

A long way from the gung-ho modernity of Kuwait and Dubai, the latest store has antique walnut tables inlaid with bone and exquisite coloured glass chandeliers. Designer handbags spill from the open drawers of old chests. True Religion, Juicy Couture and Seven jeans (at London prices) are neatly folded next to heavily sequinned Miu Miu shoes and specially made traditional Syrian jackets in heavy wool and edged with luxurious braids. ‘There’s a wealth of taste and culture and beauty in the Middle East and I want to incorporate that,’ says Majed, who art directed the store’s interior himself. ‘I want to show you I can mix local craft with international fashion.’

Indeed, his local customers do just that. There is an ebullient fashion sense in this part of the world, and women play off their big hair and huge eyes with assured combinations of Western high fashion and local items. Getting dressed is a serious business. (A Saudi princess at banquet number two declared herself totally over both Lanvin and Balenciaga and desperately seeking her next fashion thrill.)

This time last year, Majed looked all set to start up in Mumbai and is still holding out for a London opening in the refurbished Battersea Power Station in 2009. But India tied him up in red tape. ‘I have converted my vision of expansion,’ he says. ‘Now I’m only interested in developing economies. Places like Vietnam and Tehran.’ The Sheikh’s next opening will be Bahrain later this year.

In a flitty fashion way, he also has lighted upon a new designer, delighted by qualities he describes as ‘kitschy’ and ‘humorous’. ‘I stole away Marcel [Wanders] at Christmas,’ says Majed. ‘I took him and his girlfriend all over the Gulf and told him to come up with a concept. We stopped and discussed what we saw at every destination and the message was soon clear. We wanted to create a luxury souk.’ 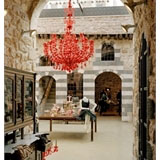 The Bahrain store will be housed in a state-of-the-art twin tower building, but it will aim to distil the essence of souk. ‘It’s slightly disorganised,’ says Wanders. ‘It doesn’t all get laid out for you. It’s up to you to look.’ And become stimulated – all a world way from the serenity of bland stone and wood used in most design emporia.

The pair are hoping to bring the same concept to Battersea. ‘London is already overcrowded,’ acknowledges Majed, who was briefly exiled here in 1991 during the Gulf War. ‘You don’t need another Selfridges.’ That much is true. But it’s now hard to believe that just five years ago, the world thought it didn’t need a retail sheikh either. l

Villa Moda is expanding into Bahrain