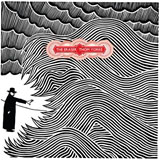 Long-time Radiohead album sleeve designer Stanley Donwood has created the cover for the forthcoming album from the band’s lead singer Thom Yorke, titled The Eraser. The image used has been developed from Donwood’s linoleum carvings, with similar work forming the basis of a solo exhibition, London Views, opening at the Lazarides Gallery in Soho tomorrow.