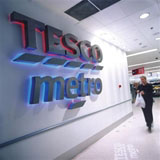 The appointment of the two strategic branding consultancies is thought to reflect a move to diversify its creative offering. It is believed that the consultancies will be tasked with undertaking some of Tesco’s more innovative projects, as the retailer looks to embark on more strategic branding work and build up its various product categories and own-label ranges.

Head of design for frozen foods at Tesco, Jeremy Lindley, has overseen the appointments, which reportedly did not involve a pitch process.

Haines McGregor confirms the appointment, while Coley Porter Bell declines to comment on its appointment. The former has been briefed to redesign Tesco’s range of dried fruit.

The London-based consultancies will join other design groups on Tesco’s design roster, which includes Rocket Design, Pemberton & Whitefoord and Astound. Tesco is also believed to be working with Fitch on undisclosed design projects (DW 2 March).

An industry insider says these two most recent appointments could represent Tesco taking more of a strategic stand.

‘Rather than just looking at packaging, these appointments represent more of a strategic branding point of view. A lot of supermarkets typically have small consultancies on their design roster, usually because of cost structure, but there is a move towards appointing the bigger boys now,’ she says.

This year Tesco added 200 new lines to its Pentagram-designed Finest category and more than 100 Healthy Living products, including a Kids Healthy range. It also extended its own-brand and Value items.

Tesco continues its move into non-food stores and is broadening its portfolio of smaller format stores, such as compact hypermarkets, discount supermarkets and convenience stores. Tesco is also preparing to launch a version of its Express stores on the west coast of the US next year. The business will be run by Tim Mason.

In its latest preliminary results, Tesco announced a 13.2 per cent increase in group sales, with UK sales growing by 10.7 per cent in the year ending 25 February.

Think outside the penalty box