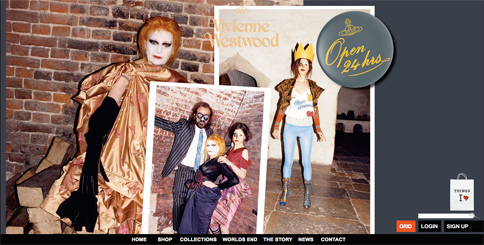 The site, which launches this week, acts as an online base for the Vivienne Westwood brand, as well has having e-commerce functionality. The consultancy developed creative concepts for the site in collaboration with the team behind fashion magazine Tank.

The site has been designed as a blank canvas, on which dynamic elements can be placed as the client or designer wishes. This has been created using a content management system developed by GA. Consultancy managing director Linford Haggie says, ’There’s no order to it – no grid. It’s as close as a website has got to the style of editorial design while still having an e-commerce function.’

Visitors to the site can move elements around on the homepage, including links to the brand story, the collections and the online store. If a user redesigns the site, then navigates away from it, it will remember their bespoke designs for the next time they visit the site.

A navigation bar also provides links, and a button on the site allows the users to flip between ’random’ and ’grid’ settings.

The blank canvas concept is used throughout the site, apart from point-of-purchase, where clarity is required and a grid system is used.

Haggie says, ’We wanted the site to reflect the brand, which is unconventional, quirky, eccentric and chaotic.’

He says GA was appointed about nine months ago and has been working on the site for some six months. He says GA and Tank previously worked together on the designs for fashion site Because.

Westwood was last week awarded a special commendation in the 2010 Prince Philip Designers Prize. It was also announced that she will be customising next year’s Brit Awards trophy, as part of a branding exercise led by Manchester consultancy Music.