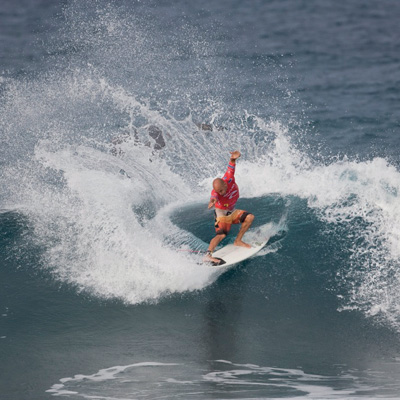 What inspires me is quite simply everything, but in the interest of writing something a little more specific I suppose I’ve got to say surfing. I tried not to write about this as for anyone who knows me it’s a bit obvious, but something of note happened recently and the simple fact is that it does inspire me.

The most famous man in surfing, Kelly Slater (pictured below), was crowned world champion this month for the tenth time. Competitive surfing is an odd one that’s taken me a while to get into – there’s ground to argue if surfing even is a sport. What you can’t argue is that it’s an incredible achievement that I feel will almost certainly never be repeated. Amazingly, he’s concurrently the youngest ever world champion at 20 and the oldest at 38. It’s pretty inspiring to have achieved such a goal.

I won’t go as far as to say he’s the greatest sportsman to have lived, but in my world he’s right up there. I find sporting achievement in general inspiring, but such dominance (and two bites at it) with such style along the way is hard to ignore.

And I want to add that, tragically, another inspirational surfer, Andy Irons, died the other day, RIP.