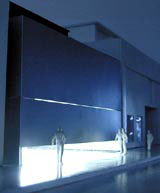 Issey Miyake is shortly to open a spectacular new boutique in New York designed by architect Gordon Kipping, protegÃ© of architect Frank Gehry, in conjunction with his mentor. The store, on Hudson Street in the city’s TriBeCa district, is conceived as the worldwide flagship store, as well as the Miyake US headquarters.

The three-floor building will combine retail, offices and warehousing and will show all of Miyake’s collections. Miyake initially approached Gehry who asked to work with Kipping on the project.

‘I asked Frank because he is someone whose unique vision can capture and project the reflection of nature’s organic qualities on to a space. He is also someone whose work creates movement, light and energy,’ says Miyake.

The store interior features Gehry’s dramatic Tornado sculptural intervention, designed in titanium, to represent creativity and the way the mind works. This contemporary intervention contrasts with the design of the cast-iron building, whose original features are retained where possible, but combined with exhibition areas to show work for emerging artists within the retail space. Neville Brody’s Research Studios is designing store graphics and printed material.

The new store, due to open later this month, will include Miyake’s latest concept, A Piece of Cloth, or A-POC as it’s also known, first introduced in Paris last year. This is conceived as an interactive space where customers can tailor pieces to their own specifications.

Expectations are high for the new crop of Prada stores opening next year – three in the US by Rem Koolhaas of OMA and a fourth in Tokyo, designed by Tate Modern architect Herzog & de Meuron.