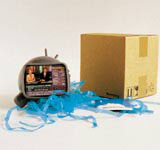 Three years ago, Bloomberg’s London creative force was a design team of just one. It shows how times have changed for the financial sector.

Back then, Kirsten Schellenberg must have felt quite a bit lonelier than she does today, now that creativity in all its forms sits so high up the agenda for Bloomberg, the global information provider to the financial industry. Nowadays, particularly with its patronage of the modern arts, the company expects brand recognition way beyond the confines of the City’s high rise square mile.

In London, nine fellow creatives (five designers, three artworkers and a copywriter) have now joined the creative director, to form a substantial design unit within the marketing services department, under the lead of Caroline Vargacz. As much as possible is designed in-house, Schellenberg explains, though specialist design groups like Peppermint and Inflate have collaborated with the creative team recently.

When you have a flat organisational structure like Bloomberg, the credit must be shared, so Schellenberg is rightly modest about her role in helping to build the team, which draws designers and artworkers from very diverse backgrounds and locations including Auckland, Paris, and the UK.

For her part, home is Rotterdam. There, she learnt her trade – five years studying graphic design at the Rotterdam Graphic Lyceum, and a year doing interiors at night school. Nevertheless, she plays an important part in keeping the team together, cementing relationships, and matching talent to design brief. (Internal pitches are used to select a designer from the team).

The results speak for themselves: already this year, the team’s quietly crafted work has been picked up by Vogue and Tatler magazines.

‘Bloomberg is my life at the moment. These people are my friends,’ she says looking through the glass of the high, open-plan office, designed by Powell Tuck Associates. It’s an amazing building, colourful, vibrant and ultra-modern, and hung with works by modern artists.

Collaborations such as those with the British Council, Tate Modern and London Fashion Week have meant that Bloomberg’s own creative talent have experienced a breadth of graphic design projects that would be the envy of many.

Next month’s opening of Tube Art 01 on the London Underground and the Surrealism show at Tate Modern, are both being sponsored by Bloomberg too. Bloomberg’s design team has been involved in design work for both events. For Tube Art 01, artworker Liz Mckerna will even have her own work displayed in Piccadilly line tube trains, alongside that of Damien Hirst and Yoko Ono.

Schellenberg says all this has been a godsend for her and the team – creatives in the traditionally grey world of finance. But you only have to step inside the door to see this world transformed. If the grand exterior of the newly refurbished offices on Finsbury Square (once a private members club) marks the old city attitude, inside the lobby, the ultra-modern banks of TV screens, lit escalators, multimedia graphics, opera and dance music and super-styled meeting rooms mark the flipside.

The designers have not needed convincing in order to inject this vibrant energy and attitude into their work, says Schellenberg. And despite her modesty, her own energy and abundant enthusiasm, which are constantly on show for all to see, have clearly played a strong part in setting the tone for the team as a whole.

Briefs for the next event flyer, brochure, installation, blow up banana, whatever is required, arrive from any corner of the Bloomberg network with deadly tight turnaround times. These are then allocated to an individual designer who takes ownership of the project, right down to liaising with printers and suppliers – there is no production team to speed things up.

In spite of its US origins the London office does not feel ‘foreign’ – though it certainly does feel different and adheres to the US work ethic of 15 days basic holiday for staff. All employees naturally work long hours and the flat structured Bloomberg culture is certainly geared to delivering results. The fact that Schellenberg commutes from London to Northampton twice a day, for example, is not considered all that unusual.

In this kind of environment morale might easily take a knock or two, but Schellenberg’s team genuinely seem to relish the adrenaline buzz. Or perhaps it’s from the free food and drink, which sits invitingly in the downstairs food hall, all hours of the day.