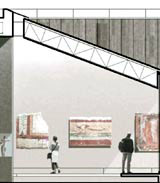 Metaphor has created exhibition development and building design concepts for a museum in Turkey that will house a collection of Roman artefacts found in the area.

If the concepts are accepted by project sponsor Packard Humanities Institute, the project is likely to be completed by next year.

The museum, at Zeugma in south-east Anatolia, will house an exhibition of artefacts, such as mosaics and metalware, dug up from an old Roman city at Zeugma in 1999 and 2000.

The museum, which is to be designed to look like a Roman house, will be temporary. Archaeologists will carry on digging the site before a permanent home can be found.

‘Our thinking is that it may become a study centre. Components for the building will be created off-site and then put together, so it could be that the building is then moved to another bit of the site,’ says Metaphor creative director Stephen Greenberg.

The building is being designed with engineer Cecil Balmond of Ove Arup & Partners.

The group won the work via a credentials pitch.