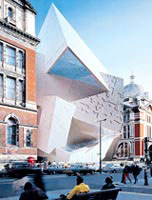 The past two decades has seen unprecedented growth in the museum sector as a market for design and the birth of a new breed of exhibition designers.

Though their talents are diverse, taking in anything from architecture to retail, the names Casson Mann, Wilkinson Eyre, Land Design and others have become synonymous with great exhibition design. They have important forebears, not least the late James Gardner, who worked on the 1951 Festival of Britain, among other seminal schemes, but throughout the 1990s a flurry of high-profile commissions have enabled this new breed to produce a new body of work of world-class standing.

That flurry started with the ‘heritage experiences’ of the mid-1980s, when specialist designers like John Sunderland of Heritage Projects came to the fore with attractions such as the Jorvik museum in York and Jasper Jacob created the realistic Blitz installation at the Imperial War Museum in London.

World expos, notably the Seville Expo of 1992, gave designers like Neal Potter and Jacob, aligned, respectively, with the old RSCG Conran and Fitch, and events specialists such as Imagination, a chance to ply their craft in a global arena. Meanwhile, design was making a showing in the UK, with the birth of the Design Museum in London in 1989, courtesy of Terence Conran, and subsequent interest in contemporary design by more traditional venues like the Victoria & Albert Museum.

Then came a spate of often Millennium-related projects, with a mix of Government, Heritage Lottery and private sector backing to build attractions to revive some of Britain’s decaying manufacturing centres. Bradford’s National Museum of Photography, Film & Television was an early example, but projects such as the Science Museum’s £48m Wellcome Wing, created by architect MacCormac Jamieson Pritchard, and even the Greenwich Millennium Dome, fueled an interest in design. Now steel museum Magna, designed by Wilkinson Eyre and Event Communications, is set to follow in their wake.

As the work of Tim Molloy at the Science Museum and the Tate Modern’s astute commissioner Nicholas Serota has shown, the commitment of an enlightened design champion is essential to get the best out of a cultural project. How fortunate we are, therefore, to have two new faces on the London museums scene: former Financial Times journalist and self-styled ‘design junkie’ Alice Rawsthorn as director of the Design Museum; and one-time curator Mark Jones taking the helm at the V&A after nine successful years constructing the Museum of Scotland.

Both are inheriting a legacy of using good design – but putting a new spin on their respective roles they could shape the future of mus-eum design and design provision in London.

Alice Rawsthorn may lack the arts administration background of most museum directors, but already she has brought the nimbleness of daily journalism to the Design Museum since she took over the directorship from Paul Thompson in April. Rawsthorn has been a trustee of the museum since 1992.

She has introduced younger or high-profile designers into the fold. The installation by passionate young London-based Austrian designer Georg Baldele that opened outside the museum last month is evidence of this, as are the museum’s Christmas card designs by Peter Saville, Marc Newson, Bruce Mau and Tomato.

She jokes of cashing in on her ‘mates’, e e but is doing it with great style. And with ‘mates’ such as museum founder Terence Conran, Design Museum chairman James Dyson, as well as Jasper Morrison and his high-ranking peers, she looks set to do great things.

Rawsthorn praises much that exists in the museum, particularly the blockbuster shows on the first floor and the education programme, but she is already implementing plans for change elsewhere. ‘Paul [Thompson] did a fantastic job of stabilising the museum,’ she says of her predecessor. ‘But it now has to be a bolder, lively, stimulating place to be. There has never been a higher level of interest in design.’

To this end she has started major ‘surgery’ on the second floor, banishing the perennial displays of kettles and the like, to replace them with ‘more cerebral’ installations such as Saul Bass film titles and a Saville retrospective. She is planning a new top floor and is revamping the foyer, with help from Conran & Partners, which is also handling the second floor changes. She plans to make the first-floor blockbusters less about design history and make them more central to the current design debate. She is installing a Collector’s Cabinet of changing artefacts and promises more focus on materials and process. She has given over a Design Now London slot to the Azumis, Design Lab, Foundation 33 and Jersey Seymour to track newish talent – the list goes on.

Funding is key in museum activities, but one of Rawsthorn’s strengths is her belief that ‘imagination doesn’t cost anything’. She has the benefit of ‘a pot of money’ from Conran and Dyson for the structural changes, but is looking to make money from corporate events and sponsors such as Audi, as well as sources such as the Department of Culture, Media and Sport.

As for communication, you might expect her to set up a publication. But while she has her long-term sights on a book publishing deal to back up the exhibitions, she sees the museum’s website, in the process of being revamped by ex-Deepend designers Chanuki Serefinhe and Will Wade, as crucial to that.

‘I will move body and soul to make it work,’ says Rawsthorn of her ambitious plans, in true Northern Protestant style. Evidence so far is that she is doing so.

Mark Jones will have to wait a while to see the first fruits of his directorship at the Victoria & Albert Museum. The new British Galleries and blockbuster shows such as Radical Fashion, which opens this week, and next spring’s Milan in a Van were planned long before he took over in June, by the team behind Ron Arad’s installation last year and the Brand.New exhibition and website. But with a curatorial background, he has the patience that goes with the slow pace of museum life. And his time will come, with the realisation of projects such as Daniel Libeskind’s £45m Spiral extension within his remit.

Jones scrutinised the model for Libeskind’s Spiral and came out in favour of the design before accepting the V&A job, having been closely involved in the Benson & Forsyth scheme for the Museum of Scotland. We can only hope he scrutinises the job description for the new head of design equally carefully before announcing the chosen candidate.

At the V&A, Jones sees design as ‘central to its purpose’ from the museum’s outset in 1851, and ‘even more relevant now’. ‘It is essential that we regard design at the head of everything we do,’ he says, citing lighting, banners and plans to reopen access to South Kensington Tube station as part of the mix.

He decided the V&A desperately needs the Spiral given the cramped space currently given over to contemporary design facilities.

‘The Spiral is vitally necessary if we are to do our existing job effectively,’ he adds. ‘It is not about the Spiral being a venture into the unknown. It is one of the most significant buildings of our time.’

But what of the new design head? ‘It’s a job for someone who is probably a good designer, but it’s about commissioning design and instilling the design culture [throughout the museum],’ he says.

The spirit of the V&A’s content is very clear to Jones. ‘People have to enjoy it, we have to fund it and it has to raise questions,’ he says. And design’s role is all-present to him.

On collaboration, Jones is talking to organisations such as the Architecture Foundation, Design Council and Royal College of Art about working together in future. Museums ‘can’t do it alone’, he says, resources are too scant.

He believes the V&A has a lot to offer a collaboration. ‘We can bring design issues to people who wouldn’t go to a specialist museum,’ he maintains.

He also believes the V&A should do more for designers and design students, who account for some 14 per cent of visitors. ‘People think of it as a rich resource, but old-fashioned,’ he says. ‘We need to make it the natural place for people interested in design issues.’ Education is, he says, important, in its broadest sense.

Jones has much to do, but his priority is raising the final £15m for the Spiral to start building before 2003. No mean feat, but a great tribute to contemporary design if he pulls it off.