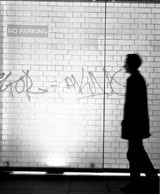 A £250 000, 50m glass wall and accompanying mirror monolith, created for the South Bank Public Art Project, has been illuminated by Stylus Marketing.

The work at Sutton Walk, which is the most commonly used route from Waterloo Station to the South Bank Arts complex, will be unveiled to the public on 21 November.

The consultancy has created an interactive light display using sensor beams that light up the wall and the monolith opposite when people pass between the displays.

The consultancy forms part of a group that includes artist Alberto Duman and architect MacCormac Jamieson Prichard. Together they have created a glass ‘image wall’, based on a photograph of the existing wall. The image has been printed onto the glass panel and is back lit. The glass monolith is the same height as the glass wall.

‘There are six light boxes in the monolith, each independently lit. Each one has a sensor, which emits a beam to a sensor on the wall. When someone walks through they cut the various beams and the light boxes flash on then fade away,’ says a spokesman for Stylus Marketing.

The consultancy was approached by Duman, who won a £200 000 international competition to design the display.

The project has been made possible by a £1m grant provided by the Arts Council to the South Bank Employers’ Group.