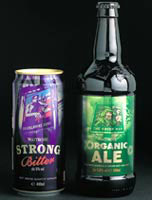 Waitrose is attempting to establish an own-label category within the premium bitter and organic ale markets with packaging by Tutssels Enterprise IG.

The consultancy has created a new look for the supermarket’s beer range including its strong bitter, organic ale and India pale ale, which hits the shelves this week.

It won the job through the Waitrose roster and has been working on the beers for three months.

The overall objective of the relaunch is to help Waitrose establish a category within a category. Retailers’ previous efforts have concentrated on the price-conscious commodity end of the market rather than the premium.

The brief was to use traditional values in a premium way, says Tutssels Enterprise IG designer Nick Hanson. ‘We wanted to bring out the crafting element of the product. The essence of the brand is having a bit of wit,’ he says.

The designs aim to recreate the feel of a local pub using a pub sign device on the packs.

The strong bitter brief was to create an identity that mirrored the (alcoholic) strength of the product and emphasise its quality.

The organic ale design eschews the hackneyed ‘earthy and worthy’ positioning of most organic products. The India pale ale design is deliberately simplistic to support the ‘story of origin’ described on the back of the label.