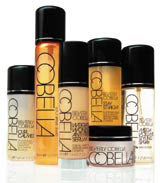 NB Studio has created packaging for Cobella, a haircare range from Boots the Chemists and current British Hairdresser of the Year Beverly Cobella, which goes on shelf this week.

The range, which launches as new chief executive Richard Baker takes over the reins at the company, is part of the £3m New@Boots campaign. The company hopes the campaign will recapture Boots’ pre-eminence in the health and beauty sector.

The Cobella packs take their design cues from perfume and cosmetics packaging and feature a ‘sexier and more feminine look’ than many of its competitors, says NB Studio director Ben Stott.

‘Cobella is a powerful character and we’re making the most of that,’ he explains. ‘The packs are pick-up-able. And the range is being positioned for 30-something women who want to treat themselves.’

Stott adds, ‘The graphics were kept monochromatic [like] the vernacular of fragrance and fashion.’

NB Studio is a roster consultancy at Boots and began work on the project last August.