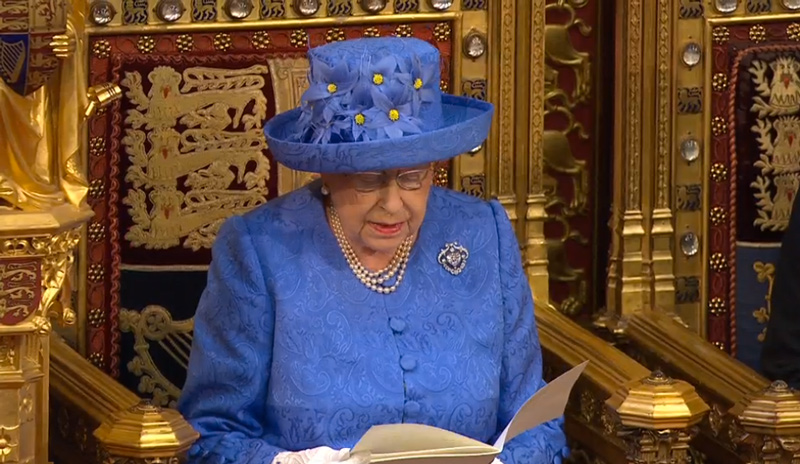 The Queen has delivered her speech, laying out the Conservative Government’s plans for the next two years, which involve several Brexit bills that could affect the creative industries.

Eight of the 24 new bills announced revolve around Brexit, reports the BBC.

This includes ending the free movement of EU nationals into the UK, repealing the European Communities Act which will mean that the UK is no longer bound by EU law, and an emphasis on trade with countries outside of the EU.

UK home to 20% of EU creatives

A Nesta report in 2015 found that the UK is currently a hub for creative jobs, showing that it is home to 20% of all creative workers in the European Union (EU), roughly 2 million out of 11 million creatives.

The design industry has previously expressed concern at the curbing of immigration in terms of its effects on attracting creative talent. Prime minister Theresa May has previously vouched to continue to attract the “brightest and best” for study and work, but it is not yet clear whether this criteria will be judged based on skills or wage .

The loss of EU law could also spell trouble for designers. Dids Macdonald, founder at organisation Anti-Copying in Design (ACID) has previously warned that the loss of existing EU copyright and intellectual property (IP) laws could mean designers can no longer depend on unregistered design rights, which “the majority rely on” to protect surface designs of products, as well as shape, she says.

However, the repeal of the act could also provide an opportunity to establish stronger, more effective copyright laws, which could place UK-based designers ahead of the game, though this is yet to be seen.

Other non-Brexit related bills that could affect designers include those centred around enabling the UK to “remain a world leader in new industries” including development of electric cars and space transport such as rockets, satellites and planes. This could produce more jobs in the engineering and product design industries.

In terms of education, there was no mention of an increase in grammar schools, as was previously outlined in the Conservatives’ manifesto. A “major reform of technical education” was promised instead.

This could mean a departure from the academic, STEM (science, technology, engineering and maths) agenda that has been pushed by Government in recent years, and could mean creative and vocational subjects are given more weight. Equally though, the promise to deliver an industrial strategy, and the emphasis on developing electric cars, establishes the Government’s priorities in technology and engineering.

There was not yet talk of an agreed partnership with the Democratic Unionist Party (DUP), which is a possibility that has been suggested since the Conservatives failed to secure a majority in the general election earlier this month. A future agreement with the DUP, which has more liberal ideas around leaving the EU, could result in a “softer” Brexit but this is yet to be seen.

“The Queen’s Speech was one dominated by Brexit, and it is likely that this will dominate the legislative agenda for at least the next two years. The Customs Bill and the Trade Bill indicate an intention by the Government to continue with proposals for Britain to leave both the European Single Market and the Customs Union, with obvious repercussions for the creative industries. Any changes to tariffs will affect the ability of designers and other firms to export their works to other European countries, and it is vital the sector continues for a response that allows for the smoothest transition possible, as the Bills pass through Parliament.

The Repeal Bill, which aims to incorporate EU law into the British statute books, will also change the way in which British designers work within the rules and regulations surrounding intellectual property. The Bill does not – as yet – indicate what is to become of how the UK engages with the European Union Intellectual Property Office (EUIPO) following Brexit, and the sector should make efforts to clarify this.

Domestically, the Queen’s Speech made no mention of the expansion of Grammar Schools suggested in the Conservative Manifesto. What this means for creative and art education is unclear. Within the context of a hung Parliament, this could mean further reforms to the English Baccalaureate (EBacc) qualification and the potential for creative subjects to be included as a component of it. The Government also announced intentions to bring forward proposals for school improvements “that can command a majority”, with an expansion in the number of technical colleges and developments of technical design education a possibility.”

“What we heard in the Queen’s speech was a very much paired down Government plan and there can be no doubt about the scale of the challenge that lies ahead.

The DBA continues to focus its attention on securing a great sector deal for the Creative Industries. Our contributions to the Industrial Strategy consultation extend this week to contributing to the Sir Peter Bazalgette Review. A growth agenda is a priority for many DBA members across the UK and we want to see skills shortages addressed, a commitment to global competitiveness despite Brexit and access to affordable space, which is a particular issue in London.

We also need assurances that a tough immigration policy (part of our Brexit negotiations) and the current education policy (which side-lines creativity) will not bring about a drought in candidates entering the UK design industry or starting new businesses in two years’ time; that will put the brakes on growth in the sector, which is the fastest growing and biggest contributor to GDP in the UK. Ours is a people business. Bottom line is, you need great people to grow it and they have to come from somewhere.”

“We welcome the recognition of the industrial strategy and the importance of equipping people with the high-value skills for the future, as well as building more homes.

“We will have to wait and see the detail of Brexit and immigration legislation to understand if it will enable the design sector to continue to thrive and grow post-Brexit. We will work to press home the vital role the design economy plays for our country and the absolute necessity that industries continue to be able to access the right talent, grow and develop skills and maintain IP and design right protections following the Great Repeal Bill.

We will gain more clarity on direction of travel on skills, education and housing following the budget and publication of consultations. The Queen’s speech sets the agenda for the next two years. And while it was understandably shorter than we are used to, it is vital that the Government focus on the issues that really matter to business, communities and people – bringing forth policies and investment that will secure our future and the future of generations to come.”