In October, a vast new shopping and leisure district opened in Central London. Based in King’s Cross, Coal Drops Yard is a major project completed by designer Thomas Heatherwick, and is home to high-end shops from brands like Aesop and Cubitts, lauded restaurants like Barrafina and quirkier facilities, like soon-to-open Facegym – a gym specifically for exercising the muscles in the face.

Coal Drops Yard visitors also benefit from the abundance of outdoor space. Heatherwick’s team designed two “kissing” arch-shaped buildings, repurposing two existing Victorian warehouses and railway stations that were built in 1850 and used to receive coal from the North of England. This leaves a big, open courtyard in the middle, a feature rarely found in gargantuan shopping centres.

King’s Cross’ new quirky, bohemian cultural destination might well be an antidote to the Westfields and the Bullrings, but it is not a spot for bargain-hunters. While the public are free to walk around in and enjoy the spaces, many of the designer shops, from Tom Dixon furniture through to Fred Perry clothing, could hardly be classified as accessible to everyone. While anyone is able to roam and window-browse, the high price of Coal Drops Yard’s products could be a barrier or deterrent for many visitors.

But Coal Drops Yard’s branding suggests otherwise. The new shopping district has been given an identity and launch campaign by advertising agency Droga5, which gave it a colourful and “eclectic” brand filled with shapes, vertical text and random photography to represent the “diversity” of King’s Cross, while breaking away from the look of “corporate” shopping centres.

“You get cookie-cutter, homogenous shopping malls dropped into any area, whether it’s London, Sydney or the United States (US),” says Chris Chapman, head of art at Droga5. “We wanted to show that people can have different experiences here, retail ones and non-retail ones.

“There are community meeting spaces, and areas to sit in with a packed lunch – so people don’t have to go to a fancy restaurant or shop,” he adds. “We’ve tried to visually communicate this variety in an eclectic way.” 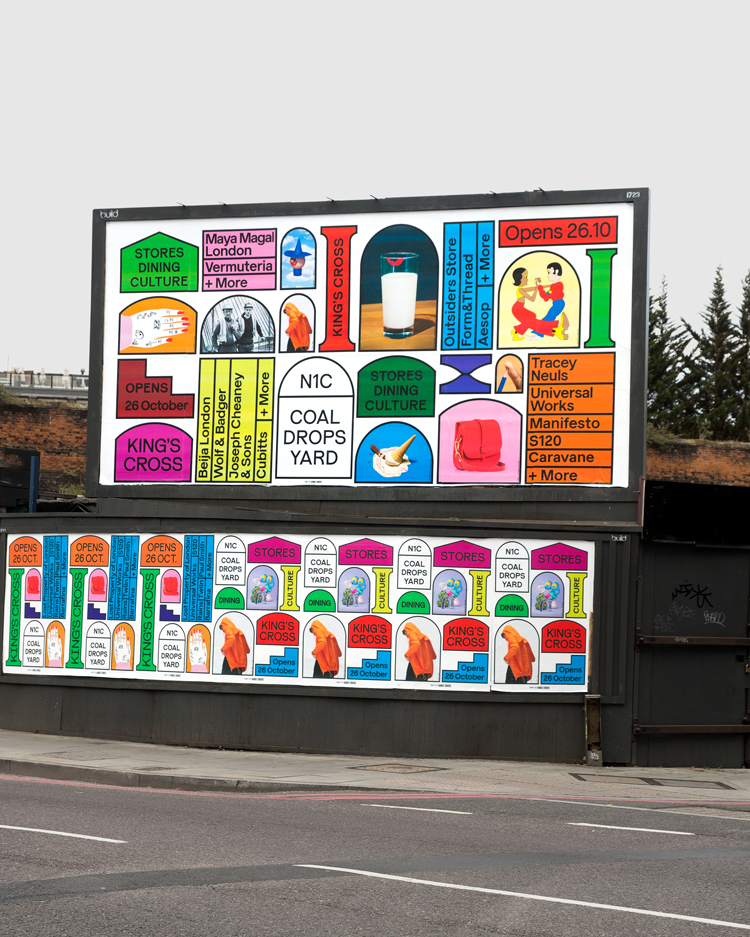 The branding, made up of photography and graphics shot and designed by local artists, aims to represent how Coal Drops Yard is a “public space” where “there is something for everyone”, Chapman says.

“The design of the space tries to make everyone feel welcome,” he says. “It’s a porous, big, open space, that isn’t shut off by entrances guarded with doormen. It’s meant to feel like part of the [King’s Cross] community.”

To reflect this, the branding takes cues from the architecture of the space itself. The identity features multiple two-dimensional (2D) shapes inspired by objects used in architecture and building, such as pillars and stairs. A semi-cylindrical arch is the most-used shape, nodding to the arch-shaped buildings that Coal Drops Yard centres around.

These various shapes are used as holding devices for different graphics and photography, created by 25 local illustrators, photographers, animators and artists, with background colours added and a black outline around the shapes to accentuate their contents. 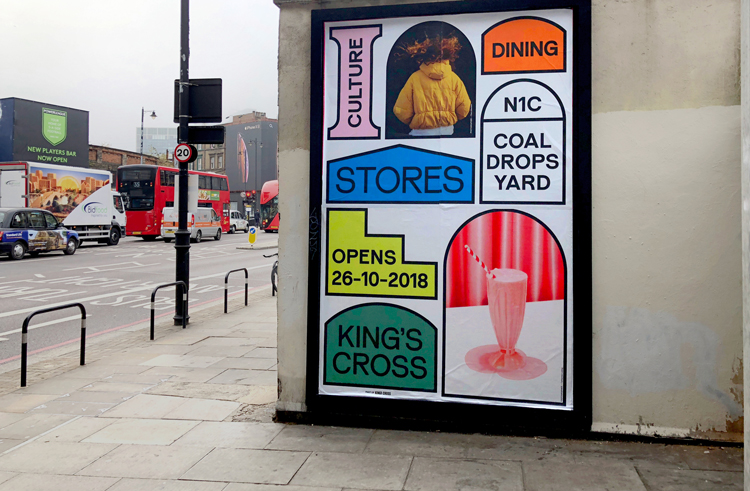 Droga5 commissioned the various artists to capture things related to King’s Cross, such as lifestyle shots of the area and portraits of local people, while “non-consumerist” motifs were also created, such as graphics of packed lunches to demonstrate what people can do in the space.

“We wanted to reflect the local community in the identity, so we avoided making all the imagery models in fur coats,” says Chapman.

A broad colour palette of shades of purple, blue, green, yellow, orange, red and pink has been used, with sans-serif typeface Reader, created by type foundry Colophon, set in black.

Text and copy is kept to a minimum, such as brand names or the campaign’s three main promotional words “stores, dining and culture”, but where it does appear it is also set in black, against a coloured background, encased within rectangle shapes then outlined in black.

Main typeface Reader is “quite a basic type”, says Chapman, but the studio has given it “variety” through creating different versions of letters and characters, with different stroke thickness. 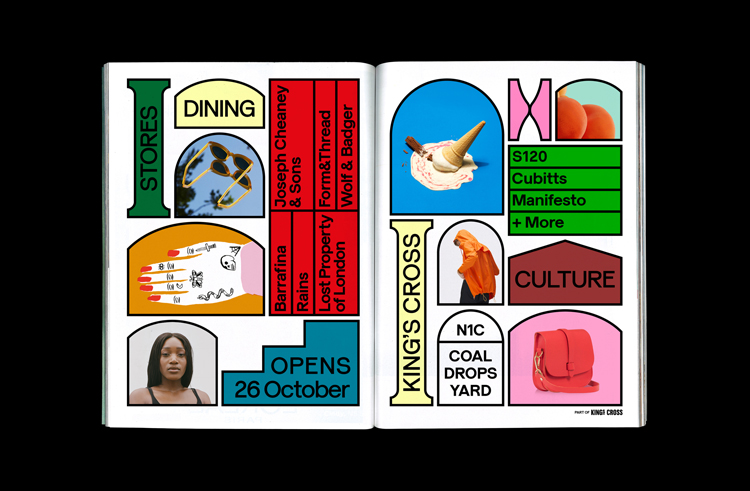 Text and imagery appears vertically as well as horizontally, as a backlash against the regular structure of information found on an advertising poster, says Chapman, in a bid to let visitors’ eyes “ramble” rather than giving them a structured direction. This aims to represent what the layout of Coal Drops Yard encourages visitors to – explore rather than be led into a “hard purchase”.

“We wanted to limit ‘corporate brand control’ and have as few rules as possible,” Chapman says. “We had to trust the identity was strong enough to play around with.”

“Normally the hierarchy of a campaign poster makes it easy to know where the eye should go,” he says. “The logo will be at the bottom right, with a clear headline to hook people in, then as they read through, they end up on the logo. It’s normally a very controlled and functional thing.” 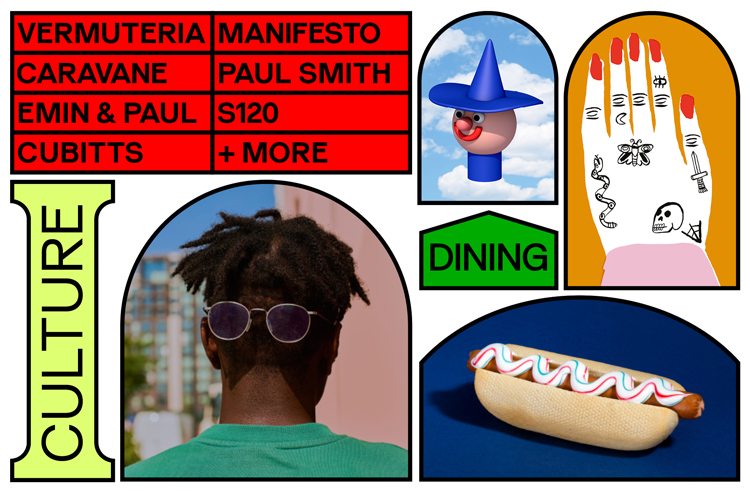 “Instead, we pared information back and broke it up into only what was necessary, and trusted that people would find what they wanted to find,” he adds.

While this colourful look might be eye-catching and different, Chapman says that the layout makes the visitor need to work harder and make up their own minds as to what they want to do in Coal Drops Yard, rather than being “pushed into a hard purchase”.

“The identity is quite jarring, you don’t know where to look,” he says. “It’s harder to absorb the information but there’s a reward when someone finds their way through it. It also stands out and makes people notice it. We wanted people to explore Coal Drops Yard and see brands’ presence, rather than being pushed into buying everything.”

“It’s about redefining consumerism,” Chapman says. “Going to Coal Drops Yard is definitely a form of consumption, but we want to make people more mindful of how they consume stuff. Going there rather than just mindlessly buying something on your phone is an all-over experience, from shopping to the space’s design to its history.” 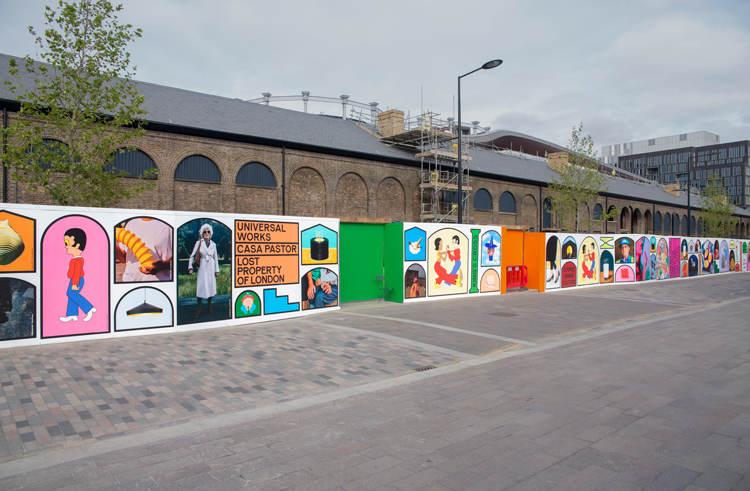 While Coal Drops Yard is certainly aimed at a discerning consumer, the brand campaign, which includes graphic hoardings spanning the perimeters of the shopping district, next to King’s Cross tube station, aims to tell the public that everyone can enjoy it, according to Chapman.

“We wanted to make it appear as un-elitist and un-gentrified as possible,” he says. “Coal Drops Yard is what it is – and it is a shopping centre. There are some quite fancy stores in there that many of us can’t afford to buy things from – but it’s also a place where there’s something for everyone.”

Having opened so recently, it is not yet clear how truly accessible the space will be. Neighbouring Granary Square – an open square filled with restaurants, cafés and Central Saint Martins art college – has come under fire since its opening in 2012 as an example of a “pseudo” public space: one that appears public, but is owned by a private corporation, restricting freedom for those who go there.

Reports have previously been made about similar squares in London, where homeless people have been moved along, and photographers have been asked by security guards not to take photos without permission. 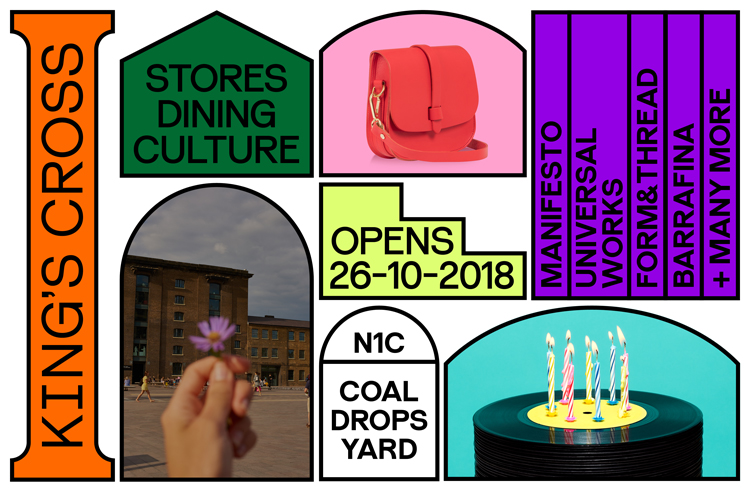 But Chapman says, while full of expensive shops and restaurants, the developers want it to be used for recreational as well as consumerist purposes – only time will tell whether Coal Drops Yard attracts a diverse mix of people, or whether it will be restricted to a wealthier audience.

“There was a genuine concern on behalf of the client, Argent, to make people feel welcome and make it as accessible as possible,” says Chapman. “We didn’t want it to feel like some cold, cut-off, swanky place – it has to feel like a public space.” 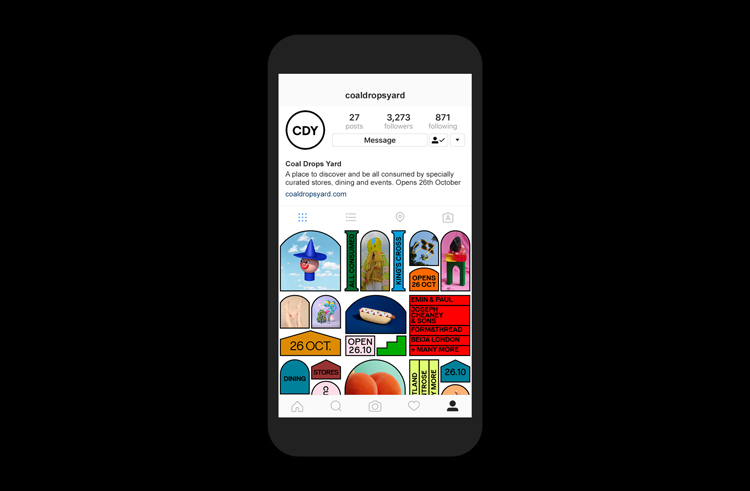 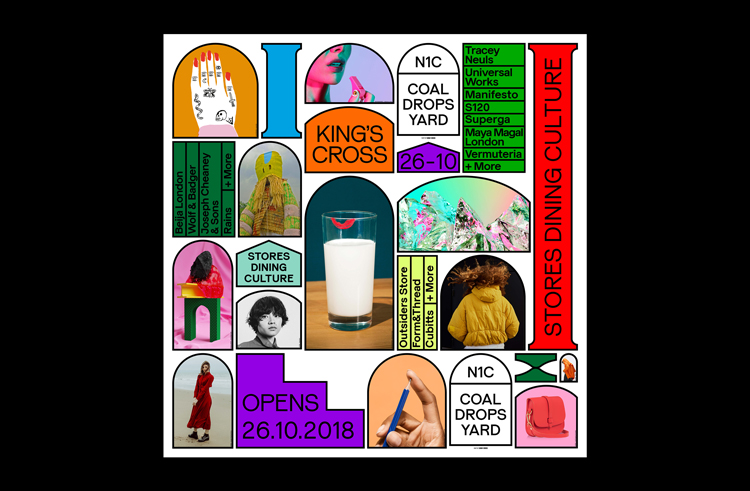 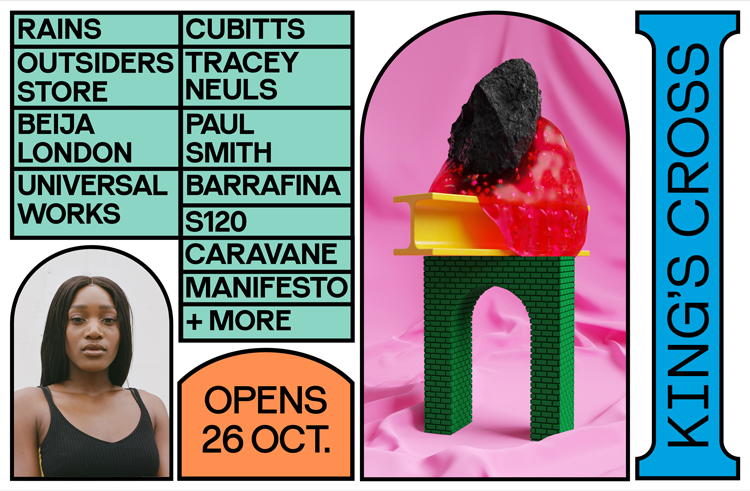