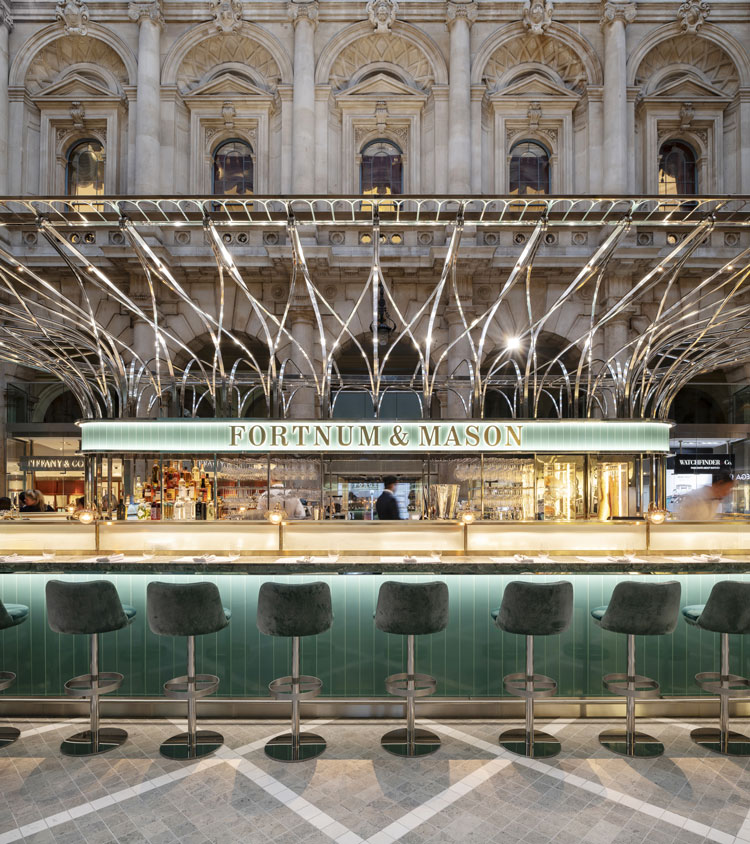 Universal Design Studio has created a new Fortnum & Mason bar, restaurant and shop in the Royal Exchange courtyard in the City of London.

The Royal Exchange dates back to the 16th century when it was founded as a dedicated place to trade stocks. The building has twice burned down and been rebuilt, with its current incarnation designed by Sir William Tite in the mid-1800s, complete with columns inspired by Roman architecture.

In 2001, the building was given a modern makeover by architectural practice Aukett Fitzroy Robinson, which transformed it into a contemporary shopping and dining destination in the heart of the City.

Now, Fortnum & Mason has taken up a spot on the ground floor of the grand building, enlisting Universal Design Studio to design the spaces. It is their fourth project together. 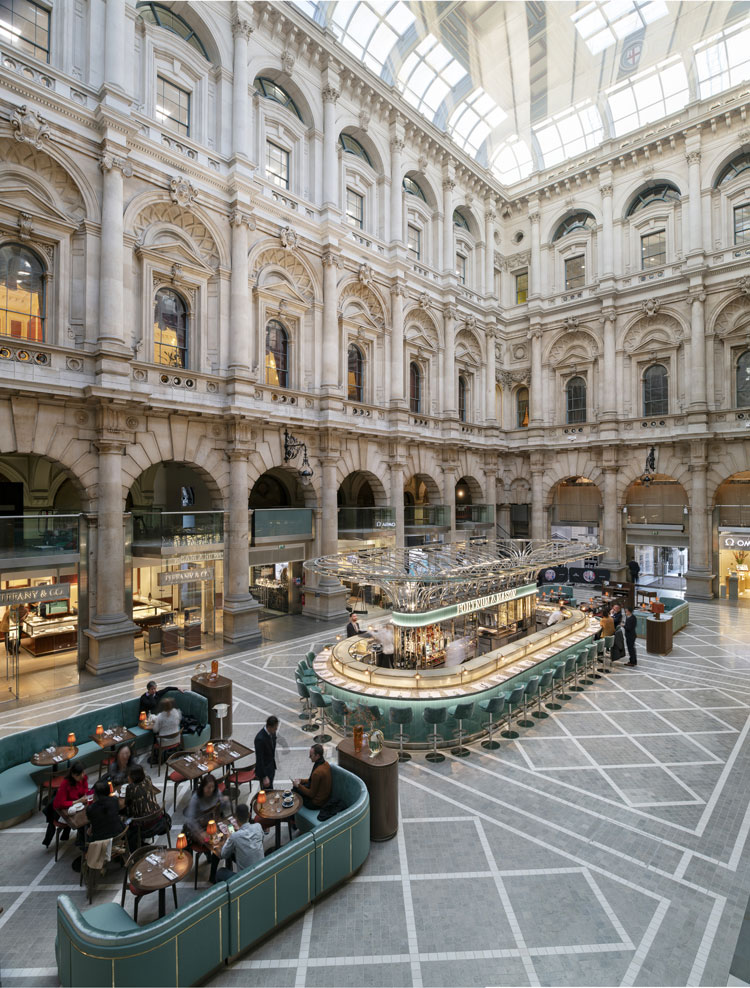 Fortnum & Mason’s London flagship store is based in Piccadilly; Hannah Carter Owers, co-director at Universal Design Studio, says this store is “very much embedded in the architecture of the building”, so the challenge was in bringing a similar feel to the “contemporary” space within the Royal Exchange.

The result is a “simple but elegant” design that aims to provide the “Piccadilly experience for the City shopper” she says, catering for “express visits” while still offering a “feeling of elevated service” and “charm”.

“You go to the Piccadilly store and you can easily lose a lot of time,” says Carter Owers. “We wanted to be mindful of City shoppers, who will just pop in [quickly] in their lunch hours to get things like Christmas gifts.” For this reason, the studio has aimed to provide “clarity” in the layout, she says, so it can be easily navigated.

Wooden perimeter units have been placed around the back wall which can be seen through the windows, displaying products from some of Fortnum’s “key categories” such as fresh produce, hampers and confectionery. 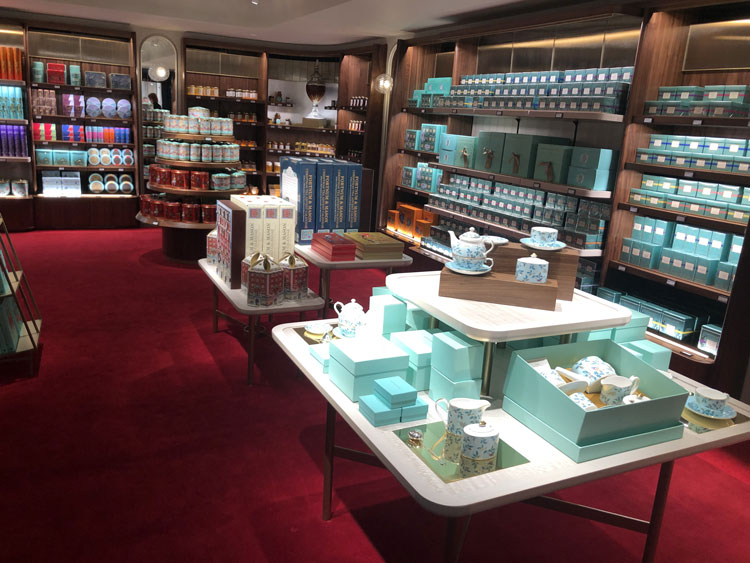 “The idea is that someone might come in and wherever they are, they get this sense of the full range,” says Carter Owers. “We have got this really strong back wall that we wanted to be really visible as it is almost like the back wall is your shop front,” she says.

The shape of the site, which is “long”, “thin” and set around a corner, means people could only “appreciate it in little bitesize chunks”, Carter Owers adds.

Mid-floor units have been kept relatively low to ensure the back wall can be seen.

Bespoke chandeliers by Studio Roso featuring dozens of Fortnum & Mason teaspoons hang in the store, a tea tasting-station takes pride of place at one end, and a red carpet, which Carter Owers says is a “brand signature”, has been laid on the floor. Other design features include wooden display units with rounded edges and mirrors. 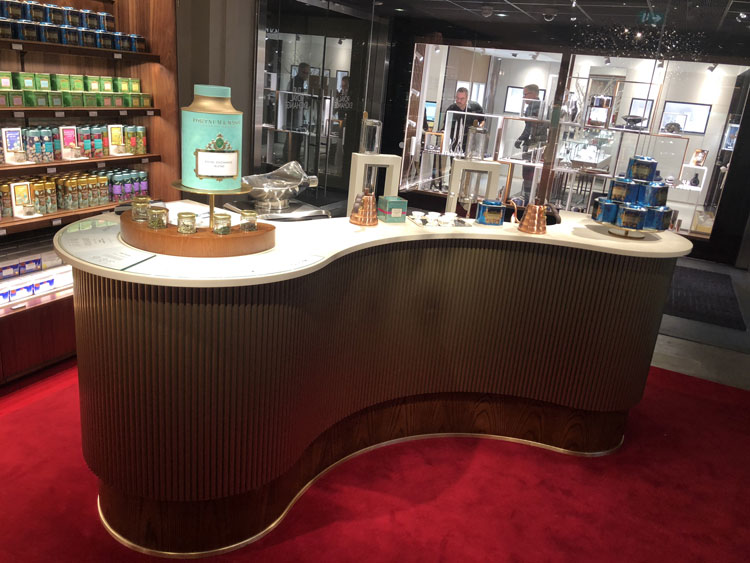 A “reasonably muted” core material palette including timber and soft brass creates a “link to the Piccadilly store”, says Carter Owers, while detailing provides a “crisp and contemporary” feel.

The second part of the project is the bar and restaurant in the centre of the courtyard.

It has been inspired by the Heathrow Terminal 5 concept of a 360-degree bar with a canopy that was created by Universal Design Studio some years ago, but takes on a bespoke design for the new space.

“The main difference between Terminal 5 and the Royal Exchange is this amazing building that surrounds us,” Carter Owers says.

“It is a super iconic space, so we created canopies that you can see through and enjoy the space. We wanted the two to feel like they are working together.”

While in Terminal 5, the canopy is solid in a bid to cover the view of the airport surroundings, the Royal Exchange canopy is made of curved metal bars so that customers sat at the bar can admire the building’s architecture. 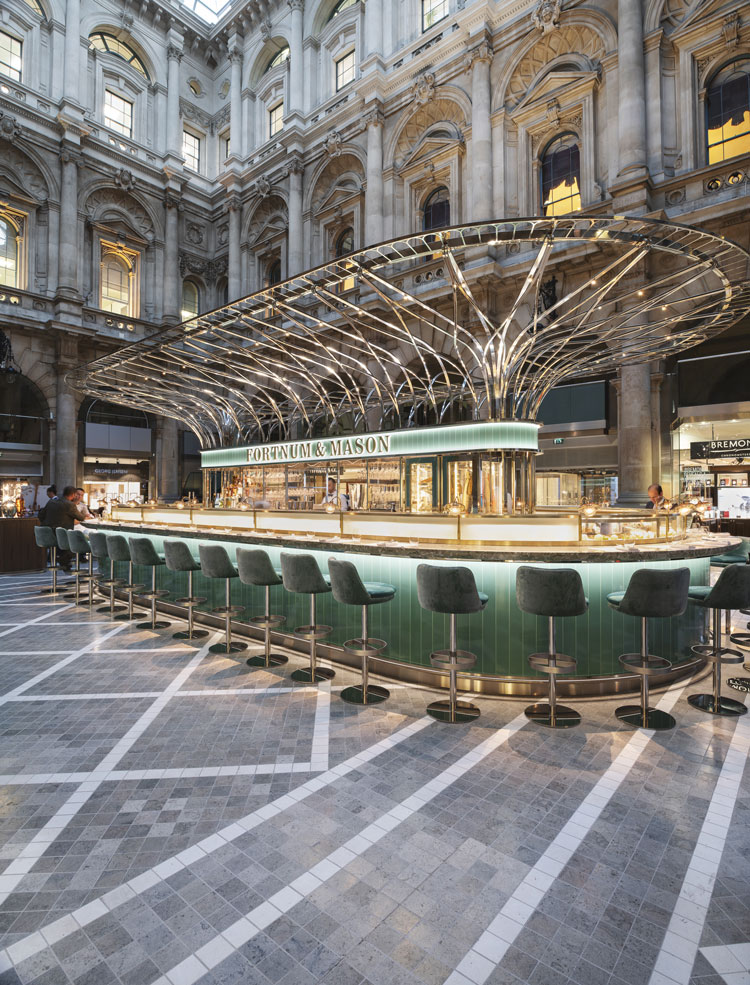 The idea for creating a canopy was inspired by Fortnum & Mason’s archives. “We found lots of examples from looking at tea canopies,” Carter Owers says. “Fortnum’s has always been a travelling brand, it provided all the provisions for Scott’s explorations.

Robert Falcon Scott was a British explorer and a Captain in the Royal Navy who was known for taking on missions to reach the Atlantic and the South Pole.

“[Fortnum & Mason] was sending out provisions across the globe to all of the corners of the British empire 200 years ago.” 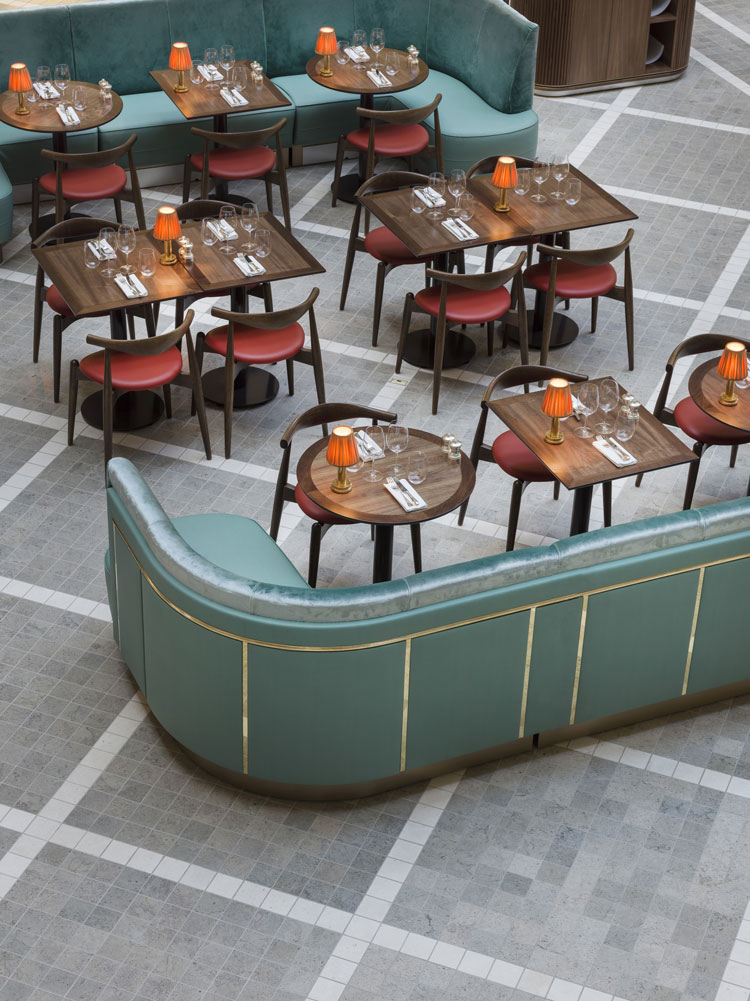 There are two modes of eating and drinking available, with stools round the bar and seated areas on either end of the restaurant.

“It is designed for smaller crowds, for the business lunch, the after-work drinks or the quick supper,” she says.

While the new bar and dining spaces are primarily aimed at “the City customer”, Carter Owers adds that the demographic of people in the City is changing, which she feels has been driven in part by The Ned, which opened in 2017 with a private members’ club, restaurants and a hotel. She believes it is bringing people to the area for recreational purposes rather than just for work.

“I think The Ned has brought life and a whole different type of person into the City,” she says. “I think the ripple effect from that is people are thinking of places in the City differently.” 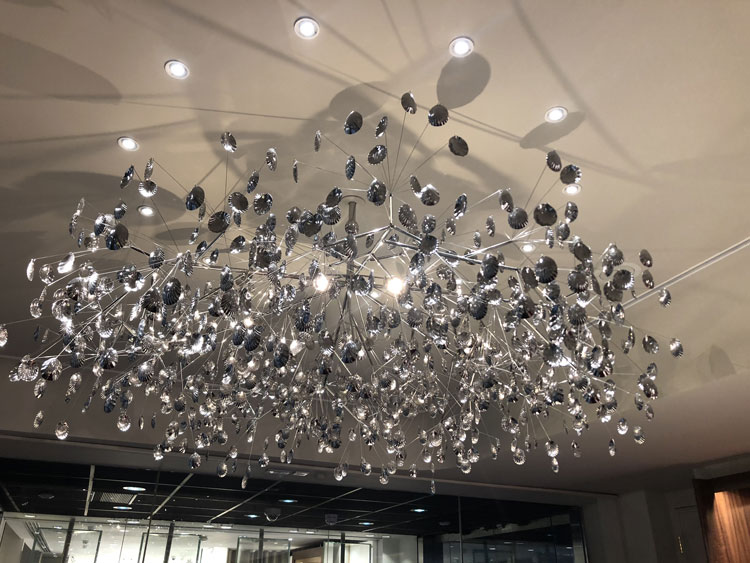 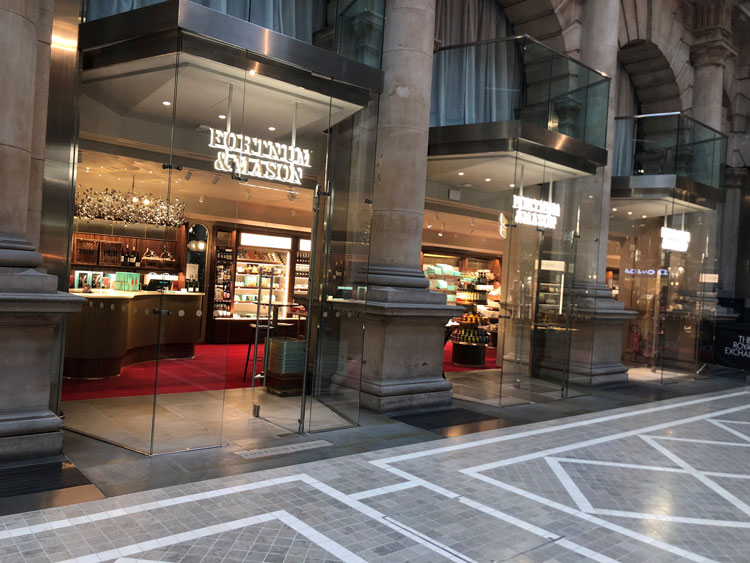