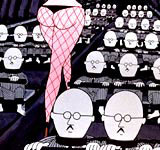 As well as being the godfather of British animation, with an Oscar and three Baftas to show for it, Bob Godfrey has been teaching for more years than he cares to remember.

“These days it’s usually a one-off gig. That’s all they can afford,” he says when the subject comes up. “It keeps me in touch with young people. You can always spot the ones with real talent. They don’t listen to you.” Bearded and benign, Godfrey is sitting at his desk overlooking London’s King’s Cross Road, where he has been based for the past 12 years. It’s not quite Wardour Street, where he had a studio in the 1960s, but the fact that he is still working at all in his 80th year is remarkable enough.

Not only working, but using state-of-the-art equipment and singing the praises of computerisation. “All the arduous stuff has gone thanks to computers,” says Godfrey. “I wouldn’t say I’m computer-literate, but I employ people who are. Computer animation has revolutionised the industry. The strange thing is my computerised films look like old trace-and-paint films because I feed the backgrounds into the computer and put the drawn animations over the top.”

Things must have changed unimaginably since Godfrey first worked for J Arthur Rank in a makeshift studio at the Odeon in London’s Marble Arch in the late 1940s. “Rank wanted to compete with the Americans so he poached one of Walt Disney’s top people and tried to set up a rival outfit to Disney, called Animaland,” he recalls. “It made the characters just different enough from the Disney characters to avoid accusations of copyright infringement.”

After one other abortive stint as a background artist for another big studio, he decided to go it alone. “There were no courses then, no-one to teach you. You just had to find out by trial and error. I bought a handle-turn camera for £2, rigged it up on a stand and started making my own films. I was so thrilled when it came out in focus. I felt like I was discovering movies about 50 years after everyone else,” he says.

By the time commercial TV started in 1955 Godfrey had set up his own studio in Soho, Biographic, with two other artist-animators, and managed to produce a 15-second black-and-white animated commercial for the very first night of commercial TV.

It wasn’t unusual for Biographic to have two commercials on screen in the same evening, which provided the financial security for Godfrey to start experimenting with his own flights of fantasy. “I loved music hall and The Goons, and all my early films look like music hall turns. Some bloke comes on facing the audience and something funny happens. I didn’t really know what I was doing. I just used to plunge in. They were simple but effective,” he says.

His work came to the attention of influential film-makers such as Richard Lester and Joseph McGrath, as well as Spike Milligan and Michael Bentine. “We were all doing quite innovative, avant-garde things in the comedy field, so we had a lot in common. In a sense we were getting ready for the 1960s,” says Godfrey.

His friendship with Lester and McGrath – he was a bit player in the video for the Beatles songs Help and A Hard Day’s Night, and an ideas man on Yellow Submarine – prompted Godfrey to suggest to John Lennon an animated version of his nonsense book, A Spaniard In The Works. “He said he really liked the idea, but I’d have to talk to Brian Epstein about the money for it. Sadly, Epstein killed himself before I had a chance to see him, so Lennon asked me to make a live action film for him and Yoko Ono called Erection. He wanted it to fool the customs people who always used to search his bags for drugs,” says Godfrey.

Since Henry 9 ’til 5 (in 1970), about the sexual fantasies of an anonymous suburban suit, Godfrey’s work has always moved along parallel lines – adult material on one track, kids’ stuff on the other. His second adult short, Kama Sutra Rides Again, changed everything in 1971. Godfrey and writer Stan Hayward felt there was comedy mileage in a cartoon Kama Sutra. “I had about 12 people working on it, each one was given a different sexual position to work on. When it was finished I got a call from Stanley Kubrick saying he wanted to release it as a short with A Clockwork Orange,” says Godfrey.

He earned next to nothing for Kama Sutra because British Lion owned the rights, but it opened a number of doors, not least the one marked Oscar. “I was showing my films to some students in London’s Leicester Square and an American guy asked me how much I wanted for Kama Sutra,” Godfrey recalls. “He said he liked it a lot and wanted to give it to his son as a wedding present. So I sold him a rough old 16mm print I had knocking around for £150 and thought nothing more about it. Then I hear I’ve been nominated for an Oscar for Kama Sutra Rides Again, which is strange because the film was never sold to America. I thought, if I could get an Oscar nomination without even trying, why didn’t I put my mind to it?”

British Lion gave him £20 000 to make Great, an extremely ambitious half-hour musical about the Victorian engineer Isambard Kingdom Brunel, and in 1975 Bob Godfrey became the first British animator to get an Oscar. In Los Angeles to collect his statuette he got to meet one of his screen idols, Mae West, “flanked by beach boys and held together by sellotape”, shortly before she died.

Great also picked up a Bafta, as did Henry 9 ’til 5, and Henry’s Cat, for which he provided the voice-over. He may no longer be making commercials, but the drive and the dedication are still there. Two years ago, Channel Four commissioned him to make Millennium the Musical, and earlier this year he produced a film about Prince William, Will’s World, written by some of The Fast Show team. Claire Kitson, his commissioning editor at Channel Four, found his approach to work unconventional. “He makes a great pretence of being chaotic. We’d have these shambolic meetings, when it would appear that nothing I’d said previously had been understood. But, in fact, he always delivered and he stuck to the schedules a lot more conscientiously than some of the bigger, hi-tech companies I’ve dealt with,” she says.

Director Terry Gilliam, whose graphics for Monty Python owed a lot to Godfrey, was a frequent visitor to Wardour Street in the early 1970s. “Godfrey’s studio was a gathering place for a lot of desperate people. It was a funny, loud, crazy place, people were always getting angry and walking out,” says Gilliam.

Godfrey’s teaching methods are every bit as unorthodox. Stick to the impossible, he tells his students. Once you’ve learnt the rules, set about breaking them. “My aim is to teach the basics of animation, then it’s up to the individual. Great illustrators don’t always make great animators. I’ve known people who can’t actually draw who were great animators.”

Looking back over 60 years, does Godfrey have any regrets? “I’d love to have done a full-length feature, but I can’t seem to stretch myself to that length. When you look at my films, they appear to be a series of 30-second commercials cut together. I’m a short distance man. Well, half an hour tops.”

Bob Godfrey is at London’s National Film Theatre on 26 April (6.30pm) and 28 April (3pm) for two programmes of his animated shorts