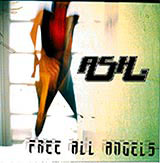 Digital Design Works has created a digitally enhanced CD for the Free All Angels album by punk-pop band Ash.

Record buyers can edit footage of the band to create their own video sequences. Videos can then be swapped on-line with other fans of the band. DDW won the project on the strength of their work for the band My Vitriol. Infectious Records label manager Nigel Adams says that on-line response from the interactive CD will be used to create a marketing plan for the album after its release. “DDW surpassed my expectations with the creation of the Ash video mixer,” he says.”They have put us at the cutting edge of the music industry.”