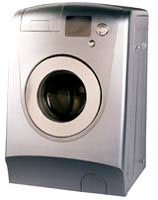 Domotechnica 1999 attracted over 72 000 visitors from 124 countries. The show, then exclusively a trade event, was dominated by domestic appliance brands such as Philips, Samsung and Zanussi. By contrast, this year’s show, held in Cologne last month, was, for the first day at least, very quiet, with only 20 000 people. A boycott by all the market leaders except Miele left many of the halls partially empty.

For the first time, the show was open to the public, with special attractions aimed directly at the consumer. One advantage of the boycott by the larger brands was that it gave you time and space to explore other companies, which may otherwise get missed out on a quick two-day visit. One example of this was Nardi, the Italian producer of ovens and refrigerators. Its stand, stylish and minimal, displayed a range of old products which have been re-skinned using frosted glass and textured steels. Interestingly executed, it was a low-cost exercise intended to revitalise Nardi’s existing products, while it engages in a major acquisition trail across Europe and the Far East.

With so many European companies missing, there appeared to be a strong Far Eastern presence this year, with 121 exhibitors from China alone, plus others from Taiwan and Hong Kong. Many were low-cost producers of original equipment and component sub-assemblies, as you would expect. However, one notable exception to this was Haier – a company to watch.

Founded in China 15 years ago, Haier has reported growth in excess of 80 per cent year-on-year. It has manufacturing plants in Indonesia, Malaysia, US and Europe and claims 20 per cent of the US small refrigerator market. With a $3.2bn (£2.2bn) turnover, it aims to be one of the world’s top ten manufacturers. Its global sales and marketing strategy is based on collaboration with companies such as Liebherr in Germany, Mitsubishi in Japan and Merloni in Italy. As well as home appliances, it displayed home entertainment products and cellular phones. All were surprisingly well made, if not visually a little familiar. Resembling better known brands such as Mitsubishi and Bosch, this seems intentional, as Haier develops products locally to reflect regional tastes.

Haier is quick to point out its commitment to quality and innovation. From a fan heater with a built in humidifier, through to the development of CFC replacement technology for refrigeration, it is clearly trying to achieve the same impact that LG and Samsung made on the world market eight or ten years ago.

There were two recurring themes in the rest of the show: a move towards professional-styled kitchens; and the integration of information technology and mobile communications into domestic appliances.

At Domotechnica four years ago, Siemens and Bosch planned to launch their Inter-bus concept to automate the home fully within about five years. This year, Turkish manufacturer Beko (which claims to have 15 per cent market share in UK) displayed its Bluetooth enabled interface, which displays the status of an appliance on your TV screen. Haier, once again in its quest to be innovative, displayed a range of concept appliances with a vague hint of Audi TT in the styling – they will all be linked to the Haier network via the Internet. To show how this system might work, domestic scenarios were appallingly acted out on video to show how you can download new software to enable your washing machine to cope with a cashmere sweater, but why isn’t the machine smart enough already?

And finally Elica, one of Europe’s largest makers of cooker hoods and FastNet (an Internet service provider), displayed a standard refrigerator with a touch screen mounted in the door. Its hope (along with many other companies) is that the fridge will become a nerve centre of the home. FastNet’s approach will link all appliances, as well as provide entertainment and data in the kitchen. FastNet has identified that the fridge is a good place to locate a screen, but this is not a new or unique idea. A group of Royal College of Art graduates did exactly the same thing in the early 1990s.

As mentioned earlier, the trend for professional-style kitchens with free-standing stoves and benches was also evident, with displays from Alpes-Inox and Steel Cooking Appliances of Italy to name just two. Known more for producing professional catering equipment, Steel Cooking Appliances already makes appliances for a number of better known consumer brands, but it is now attempting to diversify into consumer products under its own label, with a range of very well constructed stoves and hobs.

Within this group of products, one notable example was a range of benches and appliance housing from Elica. The company has chosen to diversify and produce a very sleek and modern range of housing, designed to be used with appliances from any manufacturer to create a free standing kitchen. Designed by David Lewis, who for the past 30 years has designed for hi-fi manufacturer Bang & Olufsen, the range of units is very simple, elegant and it bares the hallmark of what we may regard as definitive Scandinavian style. As for Lewis, he must be one of the design world’s best kept secrets.

It was disappointing not to see more in the way of environmentally aware products. Apart from the odd mention here and there, it was down to Energy Plus, which is backed by the industry and the European Commission. Sadly, its stand was tucked away in a dark corner of the show, promoting energy efficiency in refrigeration. One product each from Whirlpool and Electrolux were on display. Both were selected from over 100 participants in the second round of Energy Plus’s search for the most efficient refrigerators. Each has an energy efficiency of around 34 per cent, which I am told is very good.

None of the so-called trends mentioned earlier are new. If there had been a greater presence from the major brands, it might have been a more stimulating show. As to the reasons why they weren’t there, there was no official word. Rumour has it that they are either strapped for cash or spoilt for choice right now. Domotechnica used to be the only show for this market sector worth attending in Europe, but now there are rival events in Paris and Hanover, in alternate years. Marketing executives have a greater range of opportunities to promote their wares.

Contrast this with the dismal attendance at the Expo2000 last year and our own Millennium Dome. Maybe we are all a bit too well informed and worldly these days.