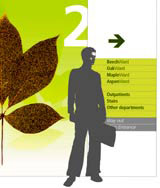 Hospitals are one of an information designer’s biggest challenges – miles of corridors, confused and upset people and a vast number of scary-sounding wards and units. Vital hours are wasted both by out-patients struggling to find where their appointment is and by staff having to spend time directing visitors and patients rather than getting on with their work.

Construction of a new private finance initiative-developed hospital in Worcester was an opportunity for architect RTKL and its in-house graphic design team to implement a sign system that not only works, but also might help to alleviate the institutional atmosphere that is prevalent in so many healthcare facilities.

The hospital trust had raised special funds for a custom-designed sign system for the 3000 signs that were needed around and throughout the building, implemented at a cost of around £350 000. RTKL’s design solution begins not at the hospital, but well before, when out-patients receive an appointment card. The appointment card uses the Frutiger typeface (in roman and light weights) and also carries a graphic symbol and location name that matches the graphics used in the hospital to aid orientation when the patient arrives for their appointment.

One of the challenges was creating signs that can be read by non-English speakers. To tackle this, RTKL devised themes and colours for the four levels of the hospital – river, meadow and woodland for the medical areas and for the office floor – and came up with appropriate, life-affirming imagery for each using manipulated photographs to give contemporary, slightly abstract forms. Water and fish for river, flora for meadow, greenery and trees for woodland and the sky for corporate. Colours are chosen that are highly distinguishable for those with colour-blindness, and text fulfils requirements for a 70 per cent contrast against the coloured background. Appropriate, non-threatening ward names were chosen such as beech, oak and maple. ‘Even if you can’t speak English you can pick out the colours and icons,’ explains RTKL graphics project manager Stewart Kidson, adding that hospitals, unlike leisure and retail operators, rarely use iconic sign images. ‘Our challenge is to ensure that we’re not condescending,’ he says.

RTKL designers are using a Modulex sign system throughout the hospital, with signs positioned at key decision-making points in the hospital – identified with the help of their architectural colleagues. In the reception area is the main sign directory showing the different colour-coded and themed levels, the lifts, corridor intersections, stairwells, each containing the floor number, colour-coded imagery, and relevant directions, as well as location-signs at each ward or unit.

‘We’re not smothering the place with signs but establishing the points that signs are needed. A lot of it is about reassuring people that they’re going in the right direction,’ says Kidson.

There is a combination of slatted, bow-fronted, wall signs and large-scale wall graphics up to 2.5m by 1.5m printed on vinyl at, for example, the end of a corridor. Other images may run along the length of a corridor to soften the austere, clinical atmosphere. The building is complete and the signs will be implemented by the end of July. The hospital will receive its first patients early next year.