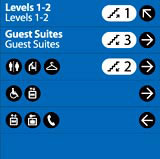 When architect Foster and Partners was commissioned by Malaysian petrochemical group Petronas to build its technology university campus, BDG McColl was called in to design the signage system. ‘Unlike most signage projects, we were introduced quite early on to work closely with the architects,’ says BDG McColl’s Chris Young, design director on the project.

Phase one of the campus will open at the end of this year and the entire campus is due to be completed by September 2002.

The site is a vast area comprising teaching blocks, residential areas, recreational facilities, a main library and retail outlets. Because of its size, the signage will have to contain a strong wayfinding element ‘to aid the student in finding his or her way in the first few days’, says Young.

Another characteristic of the system will be the colour-coding – a selection of vivid oranges, purples and turquoises that offsets the green foliage of the surrounding jungle. Cultural sensitivities have been addressed: the designers avoided the colour yellow, which is a royal colour in Malaysia. Icons, such as those indicating prayer rooms, will also be adopted, using a mix of updated internationally renowned symbols and bespoke designs. All signs are bilingual, written in the indigenous language Bahasa and English.

The Myriad typeface has been chosen ‘because it’s a contemporary and a stylish font’, says Young. ‘Foster and Partners really wanted something neat and simple, to comply with its “less is more” attitude.’

The signs will be used on monoliths as well as free-standing signs. ‘We will be using a lot of stainless steel, which can stand the humidity and the effects of direct strong sunlight,’ adds Young.