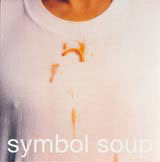 Symbol Soup is both a commentary and a collection on the Visual Generation. Divided into nine illustrated books, it explores the moods, the trends and the imagery used by those born between 1963 and 1984.

The authors, Carl C Rohde and AndrÃ© Platteel, work in mass communication, media and consumer behaviour. Their aim is to reproduce the language of the Visual Generation so the reader can experience its lifestyle and behaviour.

There has always been a tendency to appropriate youth culture. High brow academics use it for discussions about identity and subversion, advertising people use it to sell products. It provides endless inspiration for dinner table conversation because after all, knowing about “what goes on” in the multimedia world is almost as good as being part of it. The problem is, once something underground and avant garde is framed, it becomes mainstream, entering a world of packaging, re-interpretation and eventually losing its original appeal.

Symbol Soup trails through the various aspects that make up the VG world. Each book has a theme and is accompanied by slogans, images and text.

The Retro book explores how the past is consumed: the Sixties and Seventies are not historical or political eras but a period when the icons are easy to adopt and play with. Starsky and Hutch and Charlie’s Angels are revered as kitsch elements of the past. In the text symbols for these icons replace words, and the glossy layout, with bright logos makes it a pleasurable and lazy read.

The Body book looks at body piercing, extreme scarification and tribal tattoos. The photos portray urban tribes showing off their adornments; the interviews reveal some gruesome and, for me, unheard of body practices, such as amputation fetishism and cooking human toes for supper.

Digital Characters is a good exposition of the VG’s obsession with technology, games and cyber-space. It covers all sorts, from Manga through classics like Blade Runner and Robocop to the latest Nippon “digital pop stars”.

The other books are more disappointing. Look hasn’t got much to show. Pages are fitted with random images with straplines from writers or fashion gurus that don’t particularly work together. You mixes images of sex, trash and clever design to comment on the love/hate relationship VG has with the commercial world. It’s like a bad replica of a Diesel catalogue. Random Access asks nonsensical questions like: “Will it be different when it is gone?”, answered by spelling out “oxygen”.

Symbol Soup aims to be the key to visual culture in just nine chapters. This is an ambitious enterprise. The visual world is too fluid and anarchic to be constrained by a stream of words that either read like a beginner’s guide to Post-Modernism or a list of pop references.

The images are fun, but they are being sold as serious art instead of letting them speak for what they are.

Symbol Soup is published by Thames & Hudson on 6 September, price £48