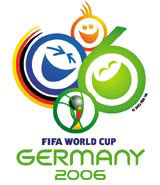 Has anyone seen the official emblem for the next FIFA World Cup in 2006, from the nation that brought us such design classics as the Munich Olympics, the Braun radio, the VW Beetle and the Tiger tank? The wise and the good in the German equivalent of our FA have commissioned and produced this – from what looks like a couple of clip art wielding executives on Blue Nun. As a colleague of mine just said, ‘What a fucking mess’.

Maybe we are responsible, after all, Kevin Keegan gave the mullet to the Germans – surely there were no Brits involved.

Seething is how I’d describe the Germans I’ve spoken to in their attitude to the World Cup marque.

Is it not time for people who care about design and fussball to speak up? What can be done?

It goes to show that because it’s in the public realm it doesn’t make it any good.