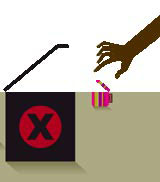 It’s four years since the seminal No Logo was published. Naomi Klein’s book is a well-researched, insightful and shocking exposÃ© of the (mal)practices of some of the world’s most powerful corporations. No Logo claims – with ample justification – that some of the most recognisable global brands around are guilty of widespread human rights and environmental abuse, bullying tactics and cultural imperialism.

This combination of greed and arrogance, Klein argues, is fuelling an anti-corporate, anti-capitalist feeling, which is growing stronger. At its most extreme, it has manifested itself in violent riots around G8 economic summits in Seattle, Prague and Genoa. At street level, it can be seen in the work of ‘adbusters’, who spray-paint posters to subvert brand messages – some more eloquently, it must be said, than others. It’s also evident in the shady practices of politically motivated computer hackers, systematically targeting companies whose workers’ appalling conditions are matched only by their appalling pay.

Whatever your view of these activists, there’s no doubt that they are giving voice to a backlash against big brands that runs deep. Consumers are tired of being told they should wear these trainers, drink this beer, eat this fast food, douse themselves in this perfume, from the moment they get up to the moment their head touches the pillow at night. They are weary of the hypocrisy of brands selling us an image of a glossy, perfect world, while the media informs us that they’re actually making people’s lives a misery and polluting the planet. They’re fed up with local character and diversity being swallowed up and replaced by bland, focus-grouped cool. And they’ve probably had enough of being referred to as consumers, too.

Somewhere in the mid- to late-1990s, the absurdity of mega-brands aimed at the youth market become apparent. While they preached rebellion and individuality, they were, in fact, selling conformity and uniformity. Their logos no longer suggested belonging to a select, savvy club, but a docile herd, which both kids and baby boomer parents, still desperate to be cool, could buy into. But, let’s face it, who wants to wear the same brand of jeans as their dad?

As a reaction to all these issues, conscious or subconscious, a new breed of ’boutique’ brand has started to emerge. They tend to be small, quirky, engaging and, above all, authentic. They encourage a friendly dialogue with the people who buy their wares, and have visible, accountable and approachable figureheads. They pay more than lip-service to sustainability and ethical standards; rather, this forms the core of what they do. Many have been set up by people who’ve lost their jobs or decided to quit the rat race and do something on their own terms that reflects their own values.

Innocent Drinks founder Richard Reed has capitalised on this philosophy. ‘[This trend] is a sign of the times,’ he explains. ‘People want to have trust in the brands they consume. With food, in particular, there’s a lot of awareness about healthy eating, genetically modified foods and BSE – the message coming across is clear: Man shouldn’t mess with nature.’

Innocent is no campaigning Body Shop, but its candour is refreshing. It is working hard to achieve sustainability, but admits there’s a way to go yet. Its bottles are currently 25 per cent recyclable, but it’s working towards 100 per cent. Its fruit isn’t all organic, but stringent independent food testers found no trace of pesticide residue in its drinks. It buys cows and mango trees for farmers in India without making a big deal of it. A sense of fun and honesty pervades virtually everything it does.

Howies is another small, appealing brand that has achieved a cult following. It proudly proclaims to be ‘Cardigan Bay’s third biggest clothing company’, and it hit the headlines last year when jeans giant Levi’s threatened to take it to court because the tags on the back pockets of its jeans were apparently too similarly positioned. This was real David and Goliath stuff, and by the time the matter was dropped Howies emerged with head held high and priceless PR.

Howies was set up by husband and wife Clare and David Hieatt, who had high-flying jobs in London advertising and design groups before moving back to Wales in 1995. As part of his personal effort to achieve a sustainable business, David canoes, cycles or runs to Howies HQ every day, and says he is having the most fun he has had in his working life.

‘People are looking for something they can believe in more – it’s a shift we’ve really noticed in our business,’ he says. ‘They want quality and to know that the company they’re buying from has similar values to their own.’ Howies’ organic cotton T-shirts typically feature socio-political slogans, from the newsworthy ‘Fish farms fuck fish’, to ‘Wood doesn’t grow on trees’ and ‘Life – for a limited period only’. ‘They make people think a bit,’ says David. ‘We’re not preacher or teacher though, we’re doing it with a certain humour and oddness.’

Cosmetics brand Lush is another brand that mixes pragmatism with ethics. ‘We’re not saying people should buy from us as opposed to some huge, faceless organisation,’ says Sarah McCartney, who edits the company’s anarchic quarterly magazine Lush Times. ‘We’re just offering people more choice. They wouldn’t buy our products if they weren’t any good.’

While Lush won’t touch anything supplied by companies who test on animals, it is more sanguine about organic ingredients. ‘Fresh fruit and veg is a must,’ says McCartney. ‘But the organic route is expensive – we also stand for affordable products.’

There’s a certain earthy, genuine quality about all these brands, but their humour and attitude helps them stay on the right side of worthiness. They’re not about global domination, but choice, fun and quality. It’s telling that large corporations, sensing the zeitgeist, are developing sub-brands that ape the same kind of language and irreverence. Ironically, this seems most prevalent in the on-line banking sector, where dialogue is actively discouraged, with brands like Mint (Royal Bank of Scotland) and Cahoot (Abbey National).

The Easy Drinking Whisky Company (DW 23 October 2003) is a complete antidote to the invasive, dictatorial ethos of super brands. It was set up by David Robertson and brothers Mark and Jon Geary, who ‘believe passionately that good quality whisky should be enjoyed and not worshipped. We’re fed up with the waffle that goes along with whisky’.

Just as everybody is sick and tired of the flimsy waffle that goes along with huge global brands.