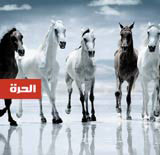 Lambie-Nairn has created the brand identity for Alhurra, a US government-sponsored TV channel for the Middle East that starts broadcasting this week.

Alhurra will broadcast in Arabic from studios in Washington DC and bureaux throughout the Middle East. Designed to counter Al Jazeera as the Arabic voice of the region, Alhurra will be focused on news and current affairs.

Lambie-Nairn was appointed to the project in October following a pitch against six US groups. Its work encompasses strategy and positioning work, in addition to on-air branding for the channel and its news programming. The channel name was already in place at the time of the group’s appointment.

Lambie-Nairn creative director Charlotte Castle says the station has been created to ‘present American news with a fresh perspective to a cynical audience’.

‘The American government wanted a news service that showed a broader view of the news, one not perceived to be coming from an Arabic source,’ she explains.

Alhurra means ‘the free one’ in Arabic and Castle says channel branding uses Arab horses to symbolise ‘freedom and the coming together of many Arab nations’.

Castle claims the work contrasts to local channels, which tend to use animated logos for channel identities.

News branding uses an ‘animated device to brand headlines’, enabling the channel to ‘gain ownership of the news every hour’, adds Castle.