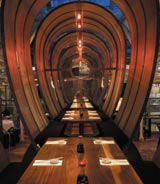 Walking into Moshi Moshi, your first impressions are of a calm space, filled with an expanse of wood and the obligatory sushi conveyor. Towards the rear, four eye-catching curved pods trace the upward slope of the ceiling. Standing about 4m high and backed with reflective foil, they look like the interior of a spaceship, dropped artfully into this Liverpool Street station eatery.

Moshi Moshi is the company that introduced conveyor belt sushi to London. It celebrates its tenth anniversary this year and its Liverpool Street restaurant, the original of the group, has recently undergone a major revamp with interiors by leading Japanese designer Yusaku Kaneshiro (DW 8 January). The transformation was overseen by the company’s operations manager Eddie McAdam.

McAdam – in his early 30s – is compact, well dressed and exudes energy and purpose. His CV reads like a who’s who of the British restaurant scene. Early in his career he worked with Rocco Forte on the opening of the Criterion and with Terence Conran on the launch of Quaglino’s.

He also spent three years in Australia, where he helped re-launch one of Australia’s most high-profile restaurants, the Bennelong at the Sydney Opera House. But it’s Quaglino’s that he identifies as the most influential.

‘Quaglino’s changed the restaurant scene in Britain,’ he maintains. ‘It was [the first] to be truly design- led and encouraged others to do the same. Before Quaglino’s, food identity in Britain was poor. Now, it’s one of the best eating scenes in the world.’

The importance of design to the sector can’t be underestimated, he says. ‘Well-designed restaurants attract not only customers, but also staff, because people want to identify with the brand and want to work in a nice environment. The revamp [at Moshi Moshi] is as much a reward for the loyalty of our staff, as it is about [commercial considerations].’

From a commercial perspective the Liverpool Street revamp aims to make the restaurant more attractive to evening diners but, says McAdam, its key objective is to refresh the brand.

‘We were a very innovative brand and unique to the restaurant scene in the UK. But over the past ten years competition has become very fierce and we needed to distinguish ourselves again,’ McAdam explains.

The company has five restaurants, all offering Japanese menus. As part of the brand-building exercise it is planning to open a sixth; a much larger Korean eatery also designed by Kaneshiro, on London’s Ironmonger Lane in May. The 372m2 space will be split over several levels and feature a floating, mezzanine-level bar, a basement restaurant serving Korean and Japanese food, a traditional Japanese garden and a yoga centre on the top floor.

McAdam says the site won’t be branded Moshi Moshi, because the company is reluctant to create the impression of being a chain.

‘We will develop the design and deliver the marketing expertise, but it’s not going to be called Moshi Moshi. A chain devalues the authenticity of the brand. The market demands individual, boutique-style places. The ubiquitous high street [approach] is seen as very negative.’

The company does work with British designers. Nigel Coates designed interiors at its first Canary Wharf site, Brighton-based graphic designer Mark Knightingale creates marketing material for the company and Chris Cooke, also in Brighton, is responsible for the company’s website, www.moshi moshi.co.uk. But, says McAdam, the brand’s core value is Japanese authenticity, both in its food offering and its interiors, which is why the company chose Kaneshiro rather than a British designer. He claims this turns the traditional approach of working with Japan on its head.

‘In the past, Japanese companies turned to western designers for major projects. But today there’s a real revival of local [talent] and Kaneshiro is a big part of that. We wanted to bring this [Japanese creativity] to London.’

According to McAdam, contemporary Japanese interiors combine aspects of the country’s rural, traditional heritage with a modern twist to replicate Japan’s more urban and technology-led elements.

At Moshi Moshi, this means combining wood and natural materials with exposed services and the futuristic pods. There are four distinct eating areas in the space – booths overlooking the station, the pods, individual seating beside the sushi conveyor, and smaller, more private two-person booths.

‘In Tokyo, where space is limited, it is important to transform small spaces into lots of different areas. Kaneshiro wanted to create something here that people can use regularly but still feel they are in a different place each time,’ says McAdam.

For all his involvement with a Japanese-led brand, McAdam is ambivalent about the country, which he has only visited once, describing it as ‘weird’, but admitting to ‘loving bits of it’. But he’s certainly not ambivalent about the brand he manages and it will be interesting to see how his energy and passion drives Moshi Moshi forward into the future.