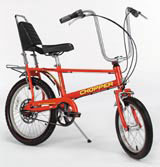 Like millions of other 1970s schoolchildren, I wasn’t allowed a Chopper. It was, my parents reasoned, at best impractical and at worst dangerous. I got a Dawes touring bike instead.

My parents just didn’t understand. The Dawes may have been lovingly hand-built. It may have survived years of neglect thanks to its outstanding build quality. But it wasn’t a Chopper.

The appeal of a Chopper was based entirely on its impracticality and danger. A Chopper offered the chance of wobbling precariously along the streets with a friend riding pillion on the luggage rack. In the event of an accident, his or her progress could be glamorously retarded by a metal bar in the teeth, and your own by a gear lever in the testicles. A Chopper was a pedal-powered embodiment of the sexed-up, I-don’t-care-if- I-live-or-die Easy Rider lifestyle.

Friends with more biddable parents had Choppers though, so we all had a go. And quickly realised they weren’t as great to ride as they were to look at. We soon noticed that the kids on Choppers were the ones who couldn’t keep up with the rest of us. The small front wheel could even develop an entertaining – for spectators – speed wobble on a fast and bumpy downhill section. And it was difficult to do wheelies.

Like a childhood crush, the appeal of the Chopper faded. Too many of them were to be seen rusting in sheds, or abandoned in canals. The BMX took over as the wheels du jour, and was considerably more useful on a vert ramp. The Chopper entered a twilight world populated by Triumph TR7s and Space Hoppers.

Now, several years after the rest of the world grew tired of 1970s nostalgia, Raleigh has decided to relaunch the Chopper.

In a half-hearted effort to tame the beast Raleigh has removed the dangerous bits. The gear lever is now on the handlebar to prevent riders from gelding themselves. However, it is still difficult to use, demanding that you release a proper grip on the bar to twist it into another ratio. Similarly, the luggage rack and seat-back appear to have been reshaped to reflect the original lines, while making it impossible to give a friend a ‘backie’. The ends of the handlebars look far more difficult to attach streamers to than they used to be, and the test model sent to Design Week’s office had the lamest bell ever attached to a bicycle.

Otherwise, according to Raleigh, the design remains faithful to the original, which flowed from the pen of Raleigh chief designer Alan Oakley. The first examples of 2004 will be numbered collectors’ editions, selling at £249.99 from next tuesday, followed by standard models that cost £50 less.

You have to wonder why. It still isn’t much fun to ride, and it should not be possible to lift the rear wheel several inches from the ground by gently applying the front brake while at a walking pace. It was difficult to test it much further, as Raleigh would lend Design Week a bike only on the condition that we promised not to take it outdoors. This doesn’t show a great deal of confidence in its product.

Perhaps, like a childhood crush, it’s advisable not to meet the object of your desires again after 20-odd years. You might be disappointed.